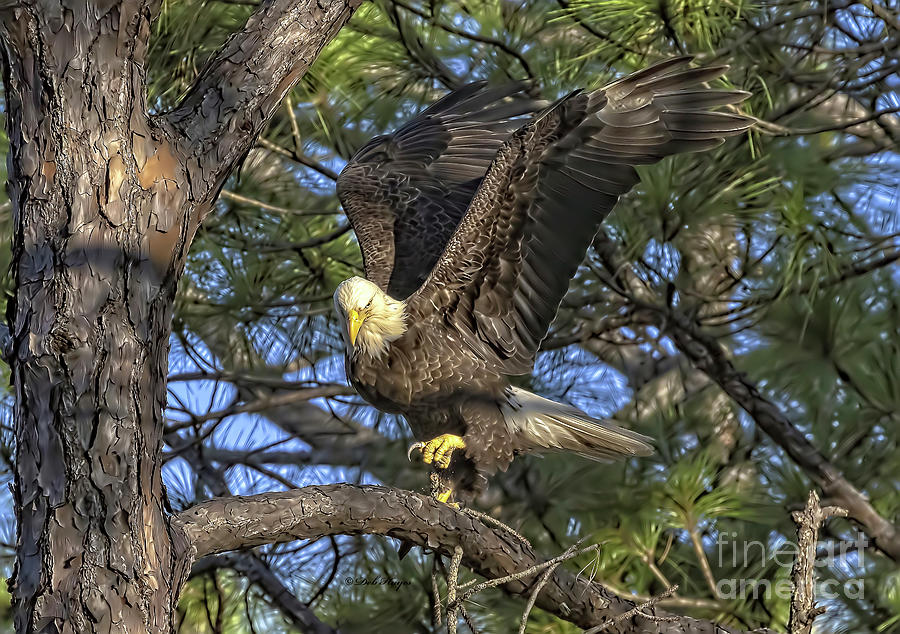 Fine Art Americas (FAA) watermark does NOT appear on sold art as FAA removes the watermark before each copy is museum quality printed on canvas, photo-paper, metal, acrylic or any of FAA’s many other available medias regardless of which one is chosen by the buyer.

COPYRIGHT DISCLOSURE NOTICE: THIS IS A COPYRIGHTED, ALL RIGHTS RESERVED PROTECTED IMAGE. IT IS ALSO MONITORED FOR ILLEGAL PIRACY DOWNLOADS BY PIXSY.

WE are honored to write the following art groups have featured Deb's "Bald Eagle" image in their groups:

This iconic American Bald Eagle was captured with a Canon 7D Mark II camera plus a Canon 100-400MM "L" Lens plus a 1.4 extender by Deb on October 27th, 2018 while we were visiting the St. Marks National National Wildlife Refuge.

The refuge is located south of Tallahassee, Florida along the Gulf of Mexico and recently a victim of hurricane Michael. However, the damage appears, from what we were able to observe, to be less than catastrophe to the refuge. Either that or the park officials did an amazing job of restoring the refuge as much as they could before reopening it to the public.

Now for a few interesting facts about this species according to Wikipedia.

The bald eagle (Haliaeetus leucocephalus, from Greek ἅλς, hals "sea", αἰετός aietos "eagle", λευκός, leukos "white", κεφαλή, kephalē "head") is a bird of prey found in North America. A sea eagle, it has two known subspecies and forms a species pair with the white-tailed eagle (Haliaeetus albicilla). Its range includes most of Canada and Alaska, all of the contiguous United States, and northern Mexico. It is found near large bodies of open water with an abundant food supply and old-growth trees for nesting.

The bald eagle is an opportunistic feeder which subsists mainly on fish, which it swoops down and snatches from the water with its talons. It builds the largest nest of any North American bird and the largest tree nests ever recorded for any animal species, up to 4 m (13 ft) deep, 2.5 m (8.2 ft) wide, and 1 metric ton (1.1 short tons) in weight. Sexual maturity is attained at the age of four to five years.

Bald eagles are not actually bald; the name derives from an older meaning of the word, "white headed". The adult is mainly brown with a white head and tail. The sexes are identical in plumage, but females are about 25 percent larger than males. The beak is large and hooked. The plumage of the immature is brown.

The bald eagle is both the national bird and national animal of the United States of America. The bald eagle appears on its seal. In the late 20th century it was on the brink of extirpation in the contiguous United States. Populations have since recovered and the species was removed from the U.S. government's list of endangered species on July 12, 1995 and transferred to the list of threatened species. It was removed from the List of Endangered and Threatened Wildlife in the Lower 48 States on June 28, 2007.

All visits to our FAA-Pixels art sites are welcomed, encouraged and appreciated. Please visit often.

Epic wildlife shot. That pose, the tones, the expression on the eagle's face... WOW!!!

Beautiful close up photograph of a Bald Eagle landing on a tree with great colors, action and timing, light, and composition, Bill and Deb! F/L

Thank you very much Morris.

Bill and Deb, happy to feature your beautiful work on Poetic Poultry! https://fineartamerica.com/groups/poetic-poultry-.html

Thank you Anita for this honor.

Thank you very, very much Scott. WE are honored.

We are honored by the featuring of Deb's "Bald Eagle" image by John Bailey in his art group "Images That Excite You". Thank you very much John. Bill & Deb

We are also very grateful to Doug Norkum, administrator for the art group "Animal Photographs: for featuring Deb's "Bald Eagle" in his group. Bill & Deb

We are very grateful to William Tasker for featuring Deb's "Bald Eagle" image in his art group. Bill & Deb

I appreciate your submission to Wild Birds Of The World - A Nature Photography Group, where this image is now featured on the homepage. L/F