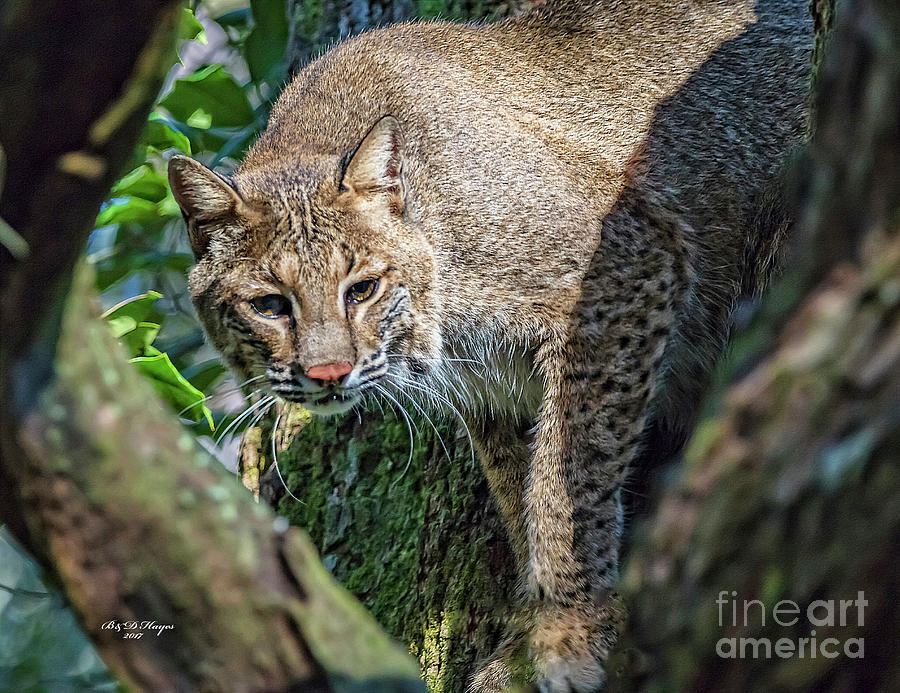 Bobcat On The Prowl

Bobcat On The Prowl

Fine Art America's (FAA) watermark will NOT appear on sold art as FAA removes the watermark before each copy is "museum quality" printed onto photo-paper, canvass, metal, acrylic or any of FAA's many other available medias regardless of the one chosen by the buyer.

IMAGE PROTECTION NOTICE: This is a COPYRIGHT & ALL RIGHTS RESERVED PROTECTED IMAGE.

WE are proud to write our "Bobcat On The Prowl" image has been FEATURED by the following highly respected art groups;

Deb and I recently visited a forested area in north central Florida where we happened upon this bobcat as it was descending down a tree not too far from where we stood. Needless to say we started photographing this beauty as fast as we could.

The bobcat (Lynx rufus) is a North American cat that appeared during the Irvingtonian stage of around 1.8 million years ago. Containing 12 recognized subspecies, it ranges from southern Canada to central Mexico, including most of the contiguous United States. The bobcat is an adaptable predator that inhabits wooded areas, as well as semi-desert, urban edge, forest edge, and swampland environments. It remains in some of its original range, but populations are vulnerable to local extinction ("extirpation") by coyotes and domestic animals. With a gray to brown coat, whiskered face, and black-tufted ears, the bobcat resembles the other species of the midsized Lynx genus. It is smaller on average than the Canada lynx, with which it shares parts of its range, but is about twice as large as the domestic cat. It has distinctive black bars on its forelegs and a black-tipped, stubby tail, from which it derives its name.

All visits to our FAA-Pixels art sites are welcomed, encouraged and appreciated. Please visit often and, if you will, tell your family and friends about our art sites. They may find something they like and thank you for the tip. Thank you for visiting.

Asbed: WE are delighted you found our "Bobcat On The Prowl" to your liking. WE greatly appreciate your time to visit and leave your awesome compliments plus the L/F. Bill & Deb

Congratulations your beautiful work is being featured in the World We See Group:-)

Robyn: WE are honored by this feature and your compliment. Thank YOU !! B&D Hayes

We would like to offer our sincere gratitude to the following art groups for featuring our "Bobcat On The Prowl" image: Fuzzy, Warm and Soft; Created by Southern Artists; Animal Photographs; HDR Photographs; Images That Excite You; Our 4-Legged Friends; All Art Welcome and USA Photographers ONLY. WE are honored by these art groups and these features. Bill & Deb Hayes

Hi Kay: Thank you for visiting our "Bobcat On The Prowl" image. Thank goodness I had my 600 mm lens attached with the 2 X extender so it had a reach of 1200 mm. We greatly appreciate your compliment plus the L/F, too. B&D Hayes

Hello David: Thank you very, very much for featuring our "Bobcat On The Prowl" on the homepage of the "Created by Southern Artists" art group. WE are honored by this feature. B&D Hayes

Beautiful! Congratulations, Bill and Deb, your exceptionally beautiful image has been Featured on "Fuzzy, Warm and Soft"!

Hello Phyllis: Thank you very, very much for visiting our "Bobcat On The Prowl", leaving your wonderful compliments and, of course, the feature of our image in your highly respected art group "Fuzzy, Warm and Soft". WE are sincerely honored by ALL !! THANK YOU again. B&D Hayes

Thank you Sarah for the visit and the compliment. B&D

Hi Cindy: WE very much appreciate your visit to our "Bobcat On The Prowl", your compliment plus the "F". Thank YOU !! B&D

beautiful, wonderful hunter and this photo shows both

Thank you Lisa for the visit and the compliment. B&D

Wow, you were certainly in the right place at the right time for this one, Bill and Deb! Excellent framing and detail, and wonderfully captured and presented! L/F

Thank you Wes for visiting our "Bob On The Prowl" imgae. WE are very grateful for your awesome compliments and the L/F. Thank you for all. B&D

Thank you Leif for your visit and your kind compliment. WE appreciate both. B&D Hayes

Hi Tina: Thank you for visiting our Bobcat and we very much appreciate your compliment as well as the L/F. B&D Hayes