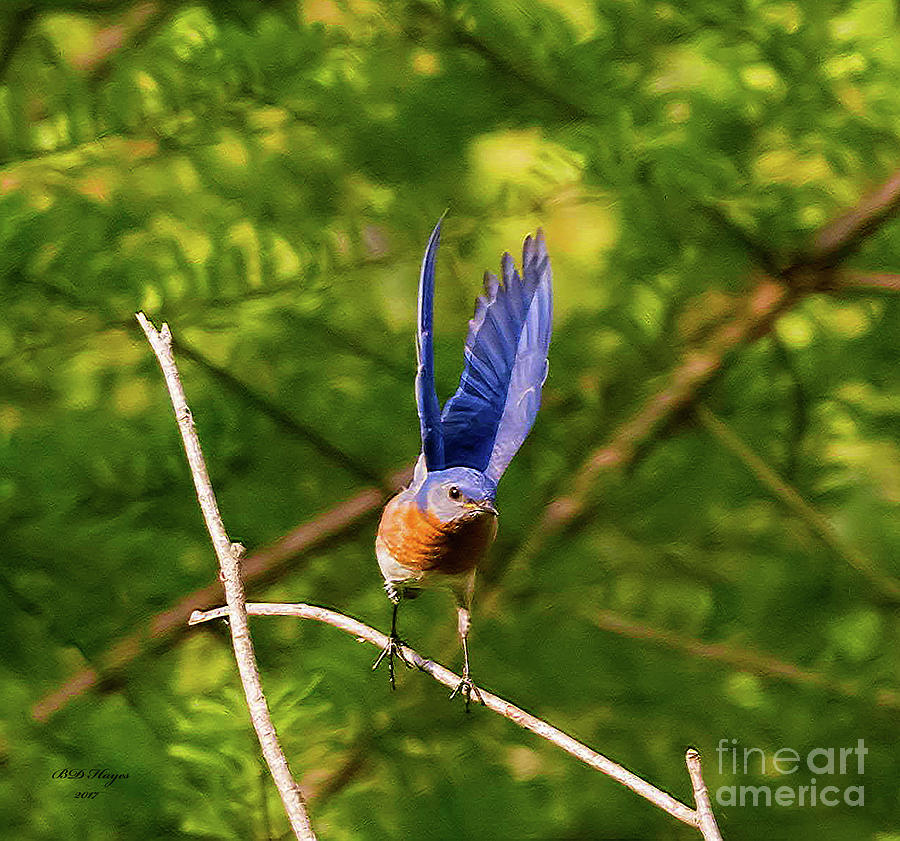 Fine Art Americas (FAA) watermark does NOT appear on sold art as FAA removes the watermark before each sold copy is "museum quality" printed onto canvass, photo-paper, metal, acrylic or any of FAA's many other available medias regardless of which one of chosen by the buyer.

Deb and I were sitting on our back yard patio early this Sunday morning (4-02-17) watching the multitude of small bids flying around our feeders and trees. Of course, we had our cameras in hands ready for action should something interesting appear. Pictured is a gorgeous Eastern Bluebird that had perched on one of the many branches of our bald cypress tree not too far from our sitting spots. As it started its lift off I, Bill, captured this image with my Nikon D7200 camera with a Sigma 150-600 mm lens attached to it. I'm reasonable sure this image was captured at the full 600 mm range. Now for a few interesting facts about this species.

The eastern bluebird (Sialia sialis) is a small thrush found in open woodlands, farmlands, and orchards. It is the state bird of Missouri and New York.

This species measures 16 to 21 cm (6.3 to 8.3 in) long, spans 25 to 32 cm (9.8 to 12.6 in) across the wings, and weighs 27 to 34 g (0.95 to 1.20 oz). Eastern bluebirds are found east of the Rockies, southern Canada to the Gulf states, and southeastern Arizona to Nicaragua. The increase in trees throughout the Great Plains during the past century due to fire suppression and tree planting facilitated the western range expansion of the eastern bluebird as well as range expansions of many other species of birds.

The bright-blue breeding plumage of the male, easily observed on a wire or open perch, makes this species a favorite of birders. The male's call includes sometimes soft warbles of 'jeew' or 'chir-wi' or the melodious song 'chiti WEEW wewidoo'.

Eastern bluebirds are very social birds. At times, they gather in flocks of a hundred or more. However, they are territorial during the breeding season and may continue to defend a feeding area throughout the winter. Mating occurs in the spring and summer. A mature female typically raises two broods each season. Nests are constructed in trees within abandoned woodpecker holes or other cavities that provide adequate protection (usually several feet above ground). Construction of the nest is done primarily by the female and takes around 10 days to complete. These nests are small, cup-like structures lined with grass, feathers, stems, and hairs. Each female lays three to seven light-blue or, rarely, white eggs. The female incubates the eggs, which hatch after 13 to 16 days. The young cannot care for themselves upon hatching. The female broods the chicks for up to seven days after hatching. Fledglings then leave the nest 15 to 20 days after hatching.

Eastern bluebirds can live for 6 to 10 years. The record lifespan for a bluebird was 10 years and five months. However, a majority of bluebirds die within their first year of life. Starvation and freezing can threaten young bluebirds, but most threats come from other animals, including humans. Natural predators of eggs and nestlings can include eastern chipmunks, flying squirrels, American black bears, fire ants, and raccoons. Bluebirds of all ages (including adults) are threatened by rat snakes, racers, and American kestrels. Introduced species such as European starlings, house sparrows and domestic cats pose a major threat to bluebird nests, as well, with the cat being a serious predator of adult bluebirds and the other birds being competitors for nesting sites. Non-nesting adults face predation with all native species of falcons, owls, and most varieties of hawks (particularly in the Accipiter genus). When approached by a predator, males make a song-like warning cry. If a male is not present, a female will begin to sing, hoping to attract a protective male back to the territory. Both males and females also flick their wings and warble when predators are nearby, but losses are often heavy when a persistent predator finds their nests.

All visits to our FAA-Pixels art sites are welcomed, encouraged and appreciated. Please visit often and, if you will, tell your friends and family about our art sites. Thank may find something they like and thank you for the tip.

Wow!!! Love the colors of this beautiful bird.Thank you for sharing Bill and Deb! L/F