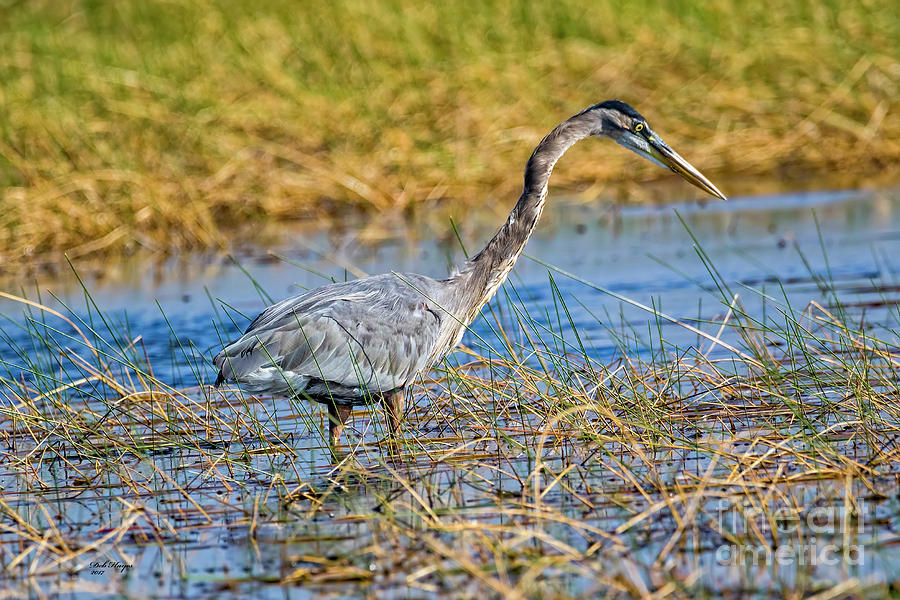 Great Blue Heron On The Hunt

Great Blue Heron On The Hunt

COPYRIGHT DISCLOSURE NOTICE: THIS IS A COPYRIGHTED, ALL RIGHTS RESERVED PROTECTED ART IMAGE.

WE are very happy an honored to write the following art groups have featured Debs captured "Great Blue Heron On The Hunt" art image;

On October 14, 2017 Deb and I felt the longing to revisit the beauty of the Saint Marks National Wildlife Refuge as we had received words from another photographer the big birds were migrating back there from the northern states. Therefore, we prepared and departed early that morning for an enjoyable and fruitful day.

While there we came upon an area where many large birds (great blue herons, ibis, tri-colored herons, egrets and others were wading around in a large shallow pond area, which was fed partly by a canal along Lighthouse Road. Deb was able to capture this beautiful Great Blue Heron with her Canon 7D Mark II camera coupled with her Sigma 600MM lens plus a 1.4 extender, which put the total reach to 840MM. This beautiful and graceful heron was slowly wading around searching for a meal in the weeds.

Thanks to Wikipedia following are facts about this species. The great blue heron (Ardea herodias) is a large wading bird in the heron family Ardeidae, common near the shores of open water and in wetlands over most of North America and Central America, as well as the Caribbean and the Galápagos Islands. It is a rare vagrant to coastal Spain, the Azores, and areas of far southern Europe. An all-white population found only in the Caribbean and Florida was once treated as a separate species and known as the great white heron.

The great blue heron was one of the many species originally described by Carl Linnaeus in his 18th-century work, Systema Naturae. The scientific name comes from Latin ardea, and Ancient Greek erodios, both meaning "heron.

The great blue heron is replaced in the Old World by the very similar grey heron (Ardea cinerea), which differs in being somewhat smaller (90–98 cm (35–39 in)), with a pale gray neck and legs, lacking the browner colors that great blue heron has there. It forms a superspecies with this and also with the cocoi heron from South America, which differs in having more extensive black on the head, and a white breast and neck.

All visits to our FAA-Pixels art sites are welcomed, encouraged and appreciated. Please visit often and, if you will, tell your family and friends about our art sites. They may find something they like and thank you for the tip.

Congratulations Bill and Deb, your work is Featured in "Coastal Water Birds-Shore Birds" I invite you to place it in the group's "2017 Featured Image Archive" Discussion!! L/Tweet

William Tasker, administrator, for the art group "Wild Birds Of The World" has now featured Debs captured "Great Blue Heron On The Hunt" image. William, we are honored and we cannot thank you enough. Bill & Deb

We are very happy to write David Neace, administrator, for the art group "Created by Southern Artists" has featured Debs captured "Great Blue Heron On The Hunt" image. Thank you very much David for this honor. Bill & Deb

Hi Bill and Deb! This is a wonderful capture of this heron's never ending quest for food! Lovely! Your beautiful image has been featured by Wild Birds Of The World, a nature photography group. L/F

Thank you Linda. We truly appreciate your visit, compliment and the L/F.

Thank you very much Stephanie.

We are very grateful to Wes Iversen for his visit, gracious compliment and the "like" and "fave". Thank you sincerely Wes. Bill & Deb

WE can now add we are very proud to write the art group "Wildlife One A Day" has featured Debs captured "Great Blue Heron On The Hunt" art image and we THANK the group administrator, Mariola Bitner for honoring us with this feature. Bill and Deb Hayes

Spot on focus and detail, and an excellent capture of this beautiful bird, Deb! L/F

WE are also honored and very happy to write Doug Norkum, administrator for the highly respected art group "Animal Photographs" has featured Debs captured "Great Blue Heron On The Hunt" art image. Thank you Doug for this honor. Bill & Deb

Another of our favorite artists to see visit our art is Robert Bales. Robert, we sincerely thank you for your visit, compliment, the "fave" and the "tweet". All are very much appreciated. Bill & Deb

Now we come to one of our very favorite art groups and administrator. Don Columbus, administrator for the art group "A Birding Group - Wings" has featured Debs captured "Great Blue Heron On The Hunt" art image in this magnificent art group. WE are very appreciative and honored. Thank you Don. Bill & Deb

Thank you very much Swedish Attitude Design for your visit, compliment and the "like" and "fave". We truly appreciate your time and trouble. Bill & Deb

As always it is a pleasure to see Deepa Sahoo's name appear as a visitor to our art. Deepa, we thank you for your visit, compliment and the "like" and "fave". Bill & Deb

Our sincere appreciation goes to Norman Johnson for his visit and compliment. Bill & Deb

Can't get much better than this one!! v/f/t