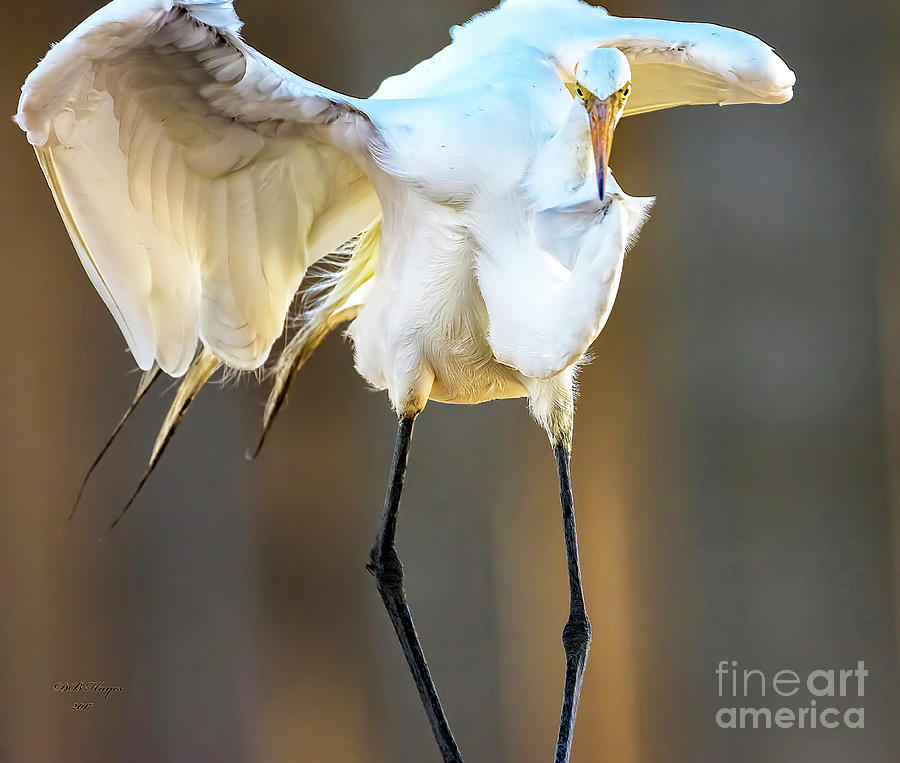 COPYRIGHT DISCLOSURE NOTICE: THIS IS A COPYRIGHTED & ALL RIGHTS RESERVED PROTECTED IMAGE.

WE are happy to write our "LEGS" image has been featured by the following highly respected art groups;

On February 11, 2017 Deb and I traveled to the beautiful Jekyll Island, Georgia to photograph anything of interest. While there we came upon this Great White Egret or as some will call it a Great Egret or an Eastern Great Egret (scientific name is ardea modesta). Regardless of the name it is called it is a beautiful and majestic bird. This particular egret was perched on a pier post around a small pond but as we started to approach it to get close enough for a good photo capture it started standing. Deb started shooting as fast as she could afraid it might fly off. However, it actually stayed put for a minute or so staring at us as though it was telegraphing its thoughts to us we had best back off.

I must admit I almost did not post this image since Deb did not capture the entire right wing or left wing if you are looking directly at it from the front. However, after some consideration I felt it is too special a photograph, not one you see everyday, so I decided to go ahead with posting it hoping you, the viewers, will overlook the missing top part of the wing. We just love the "direct dead serious" look in those eyes and its body demeanor. Now for more facts on this gorgeous species. By the way, once we had shot many images to have high hopes we would have some blur free images since we were shooting with our 600 mm lens with no tripod we left it in peace.

The elegant Great Egret is a dazzling sight in many a North American wetland. Slightly smaller and more svelte than a Great Blue Heron, these are still large birds with impressive wingspans. They hunt in classic heron fashion, standing immobile or wading through wetlands to capture fish with a deadly jab of their yellow bill. Great Egrets were hunted nearly to extinction for their plumes in the late nineteenth century, sparking conservation movements and some of the first laws to protect birds.

ALL visits to our FAA-Pixels art sites are welcomed, encouraged and appreciated. Please visit often and, if you will, tell you friends and family about our art sites. They may find something they like and thank you for the tip.

Thank you very much Morris.

Great capture! Love the menacing appearance of the face.Congrats on all the Features.~DUG

Making a safe landing is not always easy to do. Cool Shot!

Wow what a great capture l/f

Thank you Karry for your compliment, visit and the L/F. Bill & Deb

Deb and Bill, great capture with a perfect title. f

Thank you Cindy. We appreciate all. Bill and Deb

WE very much appreciate your visit and wonderful compliment Jane as well as the L/F. Bill and Deb Hayes

WOW, Deb and Bill! What a fantastic action capture of this spectacular egret! Gorgeous details, light, color and background! L/F

Hanne: Thank you for this majestic compliment and your visit. WE also very much appreciate the L/F. WE are very grateful for all. Deb & Bill

Michael: WE are very honored by this feature. Thank YOU for all you do for all of us. Bill & Deb Hayes

Thank you Jim for the visit, the compliment and the fv. WE truly appreciate all. Bill & Deb

Thank you Anna for your visit and your fantastic compliment. Bill & Deb

Thank you Khalid for your visit and compliment. Deb & Bill

Sarah: We very much appreciate your visit and very nice compliments. Deb & Bill

Superb detail and a great capture.

Thank you so much John for that wonderful compliment and your visit. Deb & Bill

Thank you Absentis for your visit and compliment. Bill & Deb