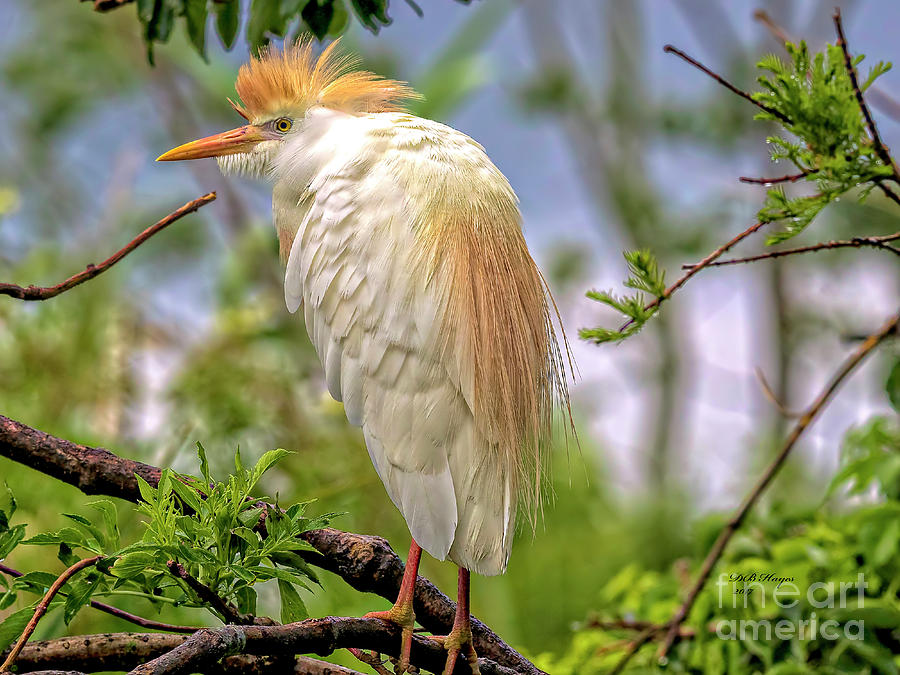 Portrait of a Cattle Egret

Portrait of a Cattle Egret

Fine Art Americas (FAA) watermark does NOT appear on sold art as FAA removes the watermark before each sold copy is museum quality printed onto canvass, photo-paper, metal, acrylic or any of FAA's many other available medias regardless of which one is chosen by the buyer.

WE are very proud to write our "Portrait of a Cattle Egret" image has been featured by the following art groups:

This cattle egret (scientific name is "bubulcus ibis") photograph was captured by Deb on May 14, 2017 while we visited the bird rookery on the Alligator Farm located in Saint Augustine, Florida.

The short, thick-necked Cattle Egret spends most of its time in fields rather than streams. It forages at the feet of grazing cattle, head bobbing with each step, or rides on their backs to pick at ticks. This stocky white heron has yellow plumes on its head and neck during breeding season. Originally from Africa, it found its way to North America in 1953 and quickly spread across the continent. Elsewhere in the world, it forages alongside camels, ostriches, rhinos, and tortoises—as well as farmers’ tractors.

Cattle Egrets follow large animals or machines and eat invertebrates stirred up from the ground. They will fly toward smoke from long distances away, to catch insects fleeing a fire.

The Cattle Egret has a broad and flexible diet that occasionally includes other birds. In the Dry Tortugas off the coast of Florida, migrating Cattle Egrets have been seen hunting migrating warblers.

Cattle Egrets have many names around the world, usually referencing the grazing animals they team up with to forage. In various languages they are known as cow cranes, cow herons, cow birds, elephant birds, rhinoceros egrets, and hippopotamus egrets.

The oldest Cattle Egret on record was at least 17 years old when it was captured and released in Pennsylvania in 1979. It had been banded in Maryland in 1962.

Another spectacular capture, I love his hairstyle and the excellent detail in this lovely image, L/f

Such a beautiful capture Bill and Deb! l/f

" I'm seriously worried that that Trump fellow steals my superior hairstyle - so that he can make his own great again ! "

Great capture of this guy in profile! L

Thank you very much Carla.

He is so pretty! L/f

Thank you very much Iris.

Wow this is such a beautiful image! I love his coloring and plumage! LF

Thank you very much Miroslava.

Always a pleasure to see your visits Heather. Thank you.

Bill and Deb, What an incredible capture of this beautiful Cattle Egret. The detail, colors and light are truly incredible...simply stunning. Nicely done. v/f

WE sincerely appreciate your gracious compliment, visit and the "fave". Thank you Deb.

I envy your skill in capturing these magnificent birds! l/f

Thank you so much for that wonderful compliment Jenny.

Thank you very, very much Nancy.

Don: We are very grateful for and honored by this feature. Thank you sincerely.

Thank you very much HH.

Yay! I was so hoping to get this shot. It is magnificent! Your beautiful image has been featured by Wild Birds Of The World, a nature photography group. L/F

Thank you William for the awesome compliment, the feature, of course, and the L/F. ALL very much appreciated.

Thank you very much John for featuring our "Portrait Of A Cattle Egret" image. WE are honored.

Thank you Don for the honor of this feature. We are very appreciative.

Thank you very, very much Judy.

This is a great capture Deb, wonderful detail, L/f/tweet

Thank you very much Brian.