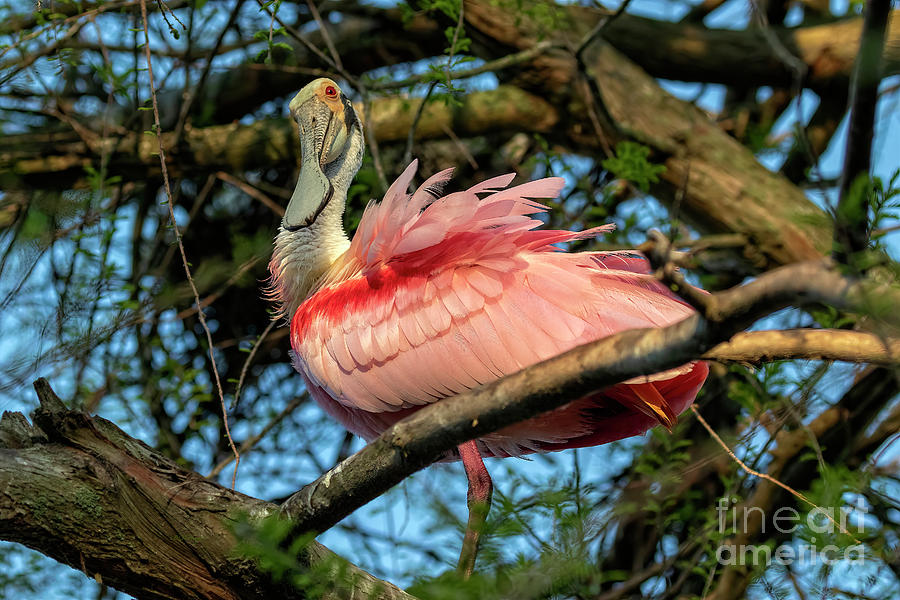 Fine Art Americas (FAA) watermark does NOT appear on sold art as FAA removes the watermark before each sold copy is museum quality printed on canvas, photo-paper, metal, acrylic or any of FAA’s many other available medias regardless of which one is chosen by the buyer.

COPYRIGHT DISCLOSURE NOTICE: THIS IS A COPYRIGHTED, ALL RIGHTS RESERVED PROTECTED IMAGE. IT IS ALSO MONITORED FOR ILLEGAL PIRACY DOWNLOADS.

WE are happy to write the following art groups have featured our "Roseate Spoonbill Poses" image:

This beautiful Roseate Spoonbill seemed to be posing for us as it stared directly at us on March 23, 2019 when we captured this image using a Canon 7D Mark II camera mated with a Canon 100-400mm "L" lens. WE also had a Canon 1.4 extender attached between the lens and camera, which boosted the focusing distance by 40%. This is one of many Roseate Spoonbills as well as many other bird species we photographed while visiting the bird rookery on the Alligator Farm located in St. Augustine, Florida that morning.

The roseate spoonbill (Platalea ajaja) - sometimes placed in its own genus Ajaja - is a gregarious wading bird of the ibis and spoonbill family, Threskiornithidae. It is a resident breeder in South America mostly east of the Andes, and in coastal regions of the Caribbean, Central America, Mexico, the Gulf Coast of the United States, and from central Florida's Atlantic coast at Merritt Island National Wildlife Refuge, adjoined with NASA Kennedy Space Center at least as far north as South Carolina's Huntington Beach State Park.

A 2010 study of mitochondrial DNA of the spoonbills by Chesser and colleagues found that the roseate and yellow-billed spoonbills were each other's closest relatives, and the two were descended from an early offshoot from the ancestors of the other four spoonbill species. They felt the genetic evidence meant it was equally valid to consider all six to be classified within the genus Platalea or alternatively the two placed in the monotypic genera Platibis and Ajaja, respectively. However, as the six species were so similar morphologically, keeping them within the one genus made more sense.

The above 2 informative paragraphs were provided by Wikipedia.

All visits to our FAA-Pixels website are welcomed, encouraged and very much appreciated. Please visit often.

I do love the Spoonbills and you've captured it beautifully! Congratulations on your well deserved Weekly Wow in Wild Birds of the World!!

I have never seen a Roseate in a tree - Nice capture! Congrats on your weekly WOW (lf)

such an odd animal. Nice work.

Bill and Deb, you won a WOWIE! This awesome image has been chosen as one of the William's Wows found in the discussions tab of the group, Wild Birds Of The World.

Bill and Deb, congrats on your stunning feature in WBOTW. f/l

A remarkable capture! Rapturous photography! I enjoyed viewing this fine nature photograph and have featured it on the homepage of the group, Wild Birds Of The World - A Nature Photography Group. L/F

Thank you William for your gracious compliments and the honor of the feature.