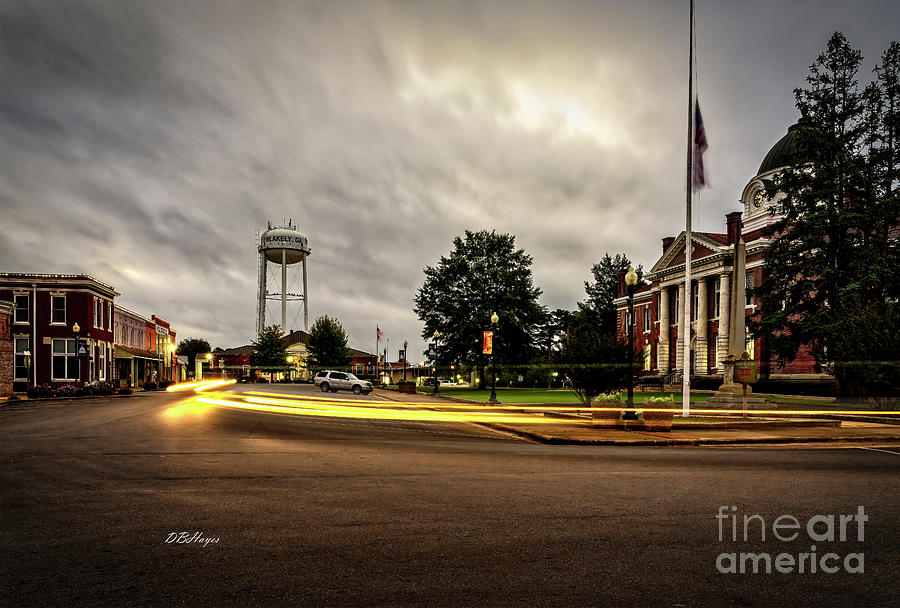 FAA's watermark does NOT appear on sold printed copies of this image.

This image has been copyrighted by DBHayes Art (Deb & Bill Hayes) and is, therefore, protected by copyright laws. All rights reserved.

This scene of Bills' hometown square (the north section of the square) was photographed on October 27, 2020 at sunrise. We used a long exposure style of photography to acquire the streaking look, which, of course, came as a result of the cars front and rear lights being stretched as if in a solid line.

When I, Bill, first looked at the image memories of growing up in Blakely, Georgia flooded my mind. The first thing I thought of was New Year's Eves during the late 1950s and early 1960s. The town square would become a place of craziness on New Years Eve until about 1963 if my memory serves me correctly.

Hundreds of people from within a 100 or more miles radius would gather around the square just before dark. Once the sun disappeared over the horizon and when the sky was dark the craziness began. The police (I think 3 were on duty at the time) would withdraw into their small police station, which was, at the time, located just inside the square itself because they knew what the craziness was coming.

Now before I explain further, please allow me, Bill, to explain this was in no way like the rioting going on now-a-days by lawless thugs like it is today around some of our American cities. The people did not destroy or hurt their fellow neighbors, strangers and/or visitors or properties. They were there to simply to have fun and blow off a little steam but to do no harm.

Now, back to the story. The drivers of the cars/hotrods would "take-the-square" as it was called at the time meaning they would drive their cars/hotrods as fast as they dared around the square. Around and around they went. While this was happening people on the sidewalks as well as from on top of some of the surrounding building would throw fireworks at them. This would sometimes go on until midnight to bring in the new year.

No-one, as far as I, Bill, know were ever hurt from these yearly events ........ until I think it was New Year's Eve of 1962. For some strange reason the Chief of Police at the time ran out of the small police station into the middle of the street surrounding the square and threw up his hands in the air as if demanding the cars to stop. Sadly, one of the cars driven by one of the drivers (I won't name the person as he did not mean for what happened to actually happen and as far as I know no charges were ever filed against him) zoomed around the corner of the street and hit the Chief full force. Up the Chief went. Up, up & up into the air. How do I know this, you wonder? Because even though I was only 14 or 15 years of age at the time, I was there just behind the policy station on the courthouse lawn watching the spectacle. The Chief had to retire after this accident as he was banged up pretty bad from the collision.

The memories. I, Bill, could write a book about growing up in this small southwest Georgia town that was so full of life back in those days. I departed Blakely on March 10, 1965 at the young of age of 17 when I traveled on a Trailways bus along with two of my friends to the Armed Forces Induction & Entrance Station in Atlanta for the purpose of joining the U.S. Army if we could qualify. We all 3 qualified and off to basic training we went for 2 months of torture and character building.

All visits to our FAA-Pixels art-sites are welcomed, encouraged and appreciated. Please visit often.

CONGRATULATIONS! Your WONDERFUL image has been FEATURED on the home page of "SHOWCASING THE SOUTH” L Please add the photo to the 2020 “FEATURED IMAGE ARCHIVE THREAD.”

Congratulations, your work is featured on the homepage of "Created by Southern Artists