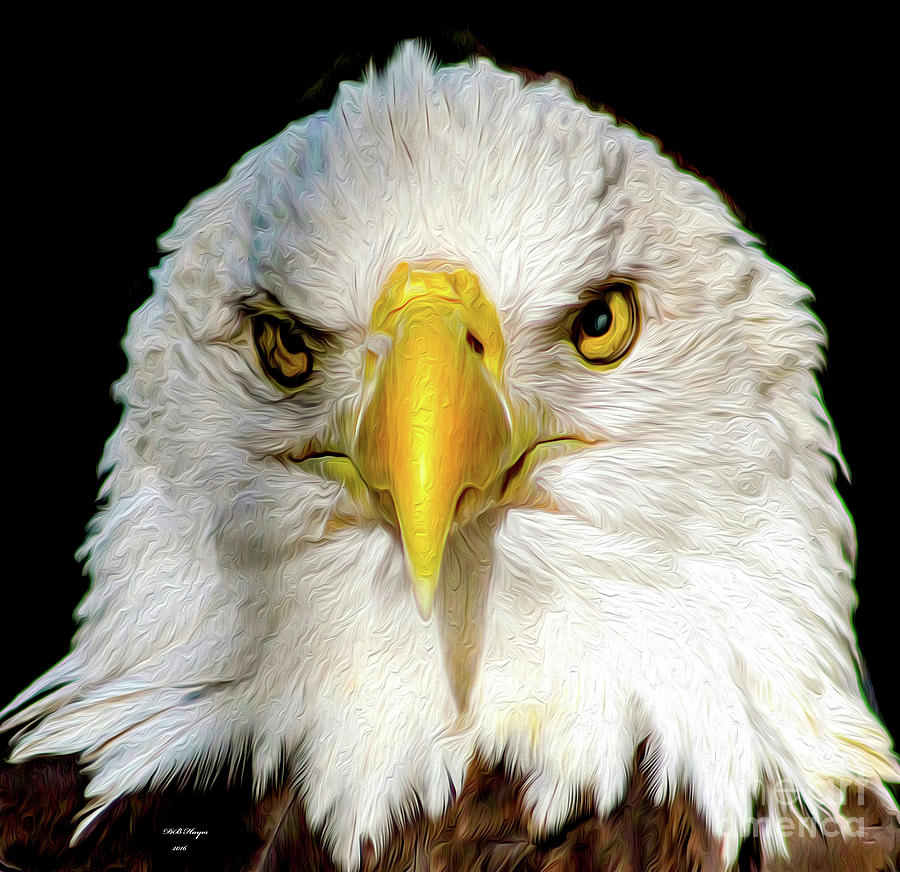 WE are proud to write the following highly respected art groups have featured our "The American Bald Eagle - USA Pride" photo-painting;

Welcome to our FAA-Pixels art sites. Pictured is a beautiful and majestic american bald eagle Deb photographed in January of 2016 while we were in north Florida. Deb asked Me, Bill, to do a close up, then touch it lightly with a digital oil brush to see the results. Needless to say since we're posting it we're both happy with the outcome and hope most of you are too. Since the american bald eagle is such a stunning majestic bald eagle it is easy to understand why it was chosen to be the USA's national bird. Now for a few facts about this species.

The bald eagle (Haliaeetus leucocephalus, from Greek hali "sea", aiētos "eagle", leuco "white", cephalos "head") is a bird of prey found in North America. A sea eagle, it has two known subspecies and forms a species pair with the white-tailed eagle (Haliaeetus albicilla). Its range includes most of Canada and Alaska, all of the contiguous United States, and northern Mexico. It is found near large bodies of open water with an abundant food supply and old-growth trees for nesting.

The bald eagle is an opportunistic feeder which subsists mainly on fish, which it swoops down and snatches from the water with its talons. It builds the largest nest of any North American bird and the largest tree nests ever recorded for any animal species, up to 4 m (13 ft) deep, 2.5 m (8.2 ft) wide, and 1 metric ton (1.1 short tons) in weight. Sexual maturity is attained at the age of four to five years.

Bald eagles are not actually bald; the name derives from an older meaning of the word, "white headed". The adult is mainly brown with a white head and tail. The sexes are identical in plumage, but females are about 25 percent larger than males. The beak is large and hooked. The plumage of the immature is brown.

The bald eagle is both the national bird and national animal of the United States of America. The bald eagle appears on its seal. In the late 20th century it was on the brink of extirpation in the contiguous United States. Populations have since recovered and the species was removed from the U.S. government's list of endangered species on July 12, 1995 and transferred to the list of threatened species. It was removed from the List of Endangered and Threatened Wildlife in the Lower 48 States on June 28, 2007.

All visits to our FAA-Pixels art sites are welcomed, encouraged and appreciated. Please visit often and, if you will, tell your friends about our art sites. They may find something they like and thank you for the tip. Thank you for visiting.

Beautiful close up image of a Bald Eagle with great colors, details, and pose, Bill and Deb! F/L

Cindy: We greatly appreciate your compliment and the f/l. Bill and Deb

Thank you John very much. Bill and Deb

Congratulations Deb, your work is Featured in "A Birding Group - Wings" I invite you to place it in the group's "2017 Featured Image Archive" Discussion!! L/Tweet

Thank you Don for the honor of this feature, for which, we are very grateful. Please also know we very much appreciate the L/Tweet. Bill and Deb

Thank you Anita for the honor of this feature. WE are very, very grateful. Deb and Bill

Deb, thank you for sharing this fabulous work in "Eagles, Owls, and Hawks" discussion on Poetic Poultry Group ;)

Anita: You're welcome and it was very much our pleasure to do so. WE greatly appreciate all you do for all of us. Bill and Deb

Love this painting of the Bald Eagle. L.F.

Thank you Geraldine for visiting, your compliment and the L/F. WE very much appreciate all. Bill and Deb

Congratulations! on this unique image’s being Featured in “The Artistic Aperture” group, and also Liked, Favorited, and Facebooked.