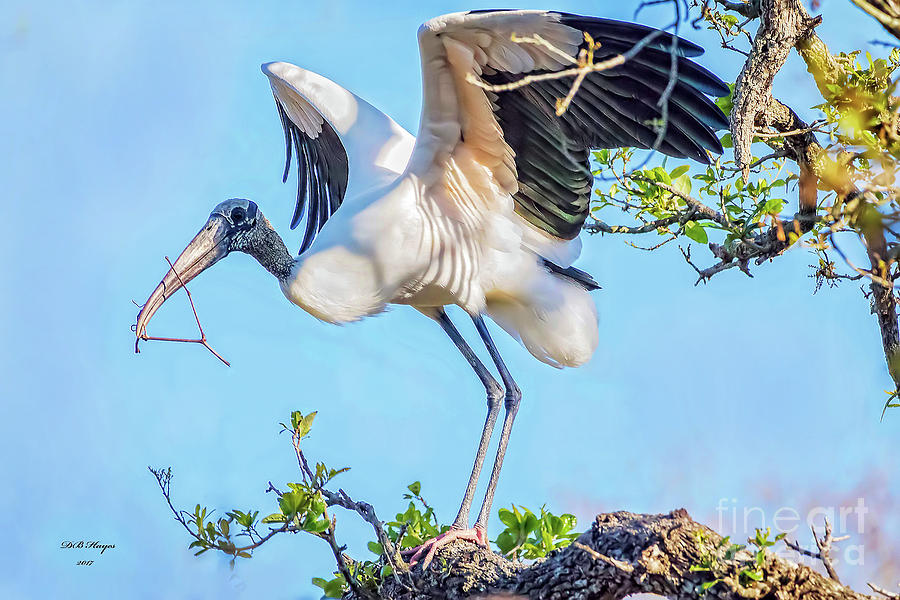 WE are very proud to write the following highly respected art groups have featured on the date indicated by each group's name our "Wood Stork - Nest Builder" image;

Deb captured this gorgeous Wood Stork as it landed just above its nest on a tree located at the Alligator Farm bird rookery, which is located in Saint Augustine, Florida. We visited this incredible place on Wednesday & Thursday, March 15th & 16th, 2017 to photograph birds. This was our first visit to the Alligator Farm but it most certainly will not be our last. Fact is there were so many birds nest building to lay eggs or had already built nests and were sitting on the eggs our minds were shocked and pleasantly amazed at the numbers. Now for some scientific information about this species.

The Wood Stork (Mycteria americana) is a large American wading bird in the stork family Ciconiidae. It was formerly called the "wood ibis", though it is not an ibis. As of June 26, 2014 it is classified as a threatened species by the U.S. Fish & Wildlife Service.

The wood stork is the only stork that presently breeds in North America. In the United States there is a small breeding population in Florida, Georgia, and South Carolina, along with a recently discovered rookery in southeastern North Carolina. After a successful three-decade conservation effort resulting in an increased population in the southeastern United States, the wood stork was removed from the endangered species list and upgraded to threatened on June 26, 2014. Similarly, in the state of Santa Catarina, Brazil, its decline seems to have been reversed: after an absence between the late 1960s and the mid-1990s, the species is now again regularly encountered there, in particular in the Tubar River region. It is likely that the Paran River region's wetlands served as a stronghold of the species, from where it is now re-colonizing some of its former haunts. Globally, it is considered a species of Least Concern by the IUCN due to its large range.

The wood stork is a broad-winged soaring bird that flies with its neck outstretched and legs extended. It forages usually where lowering water levels concentrate fish in open wetlands; it also frequents paddy fields. Walking slowly and steadily in shallow water up to its belly, it seeks prey, which, like that of most of its relatives, consists of fish, frogs and large insects. It catches fish by holding its bill open in the water until a fish is detected.

In the United States, the wood stork favors cypress trees in marshes, swamps, or (less often) among mangroves and nearby habitat.

Wonderful capture of this impressive Wood Stork. Not the prettiest kid on the block but I do love that unique face and beak. They're so majestic in-flight too. Great capture, Deb ... and Bill. :) l/fv

Thank you Carol for your gracious compliment, visit and the L/F. Bill and Deb

WE are honored by this feature, invitation and the L/Tweet Don. And we THANK YOU for all you do for all of us. Bill and Deb Hayes

Thank you Johannes. WE sincerely appreciate your visit to our art, compliment and the L/F. Bill and Deb

Wow! This is a stunning capture of this beautiful Wood Stork, Bill and Deb! V/F

Thank you Phyllis for your marvelous compliment, visit and V/F. Bill and Deb

This is truly an honor for Don and we sincerely appreciate it. Thank you. Bill and Deb

Beautiful capture - one I've hoped for! Congratulations on your feature in Wild Birds of the World. l/f

Bill and Deb, such a happy home-builder ;) Featured on Poetic Poultry! https://fineartamerica.com/groups/poetic-poultry-.html

Stunning capture! Superb! Is Rick right? :) Your beautiful image has been featured by Wild Birds Of The World. L/F

Yes Rick was right. Deb captured this image we're proud to write. Thank you for the feature and the compliment plus the L/F. WE very much appreciate all. Bill and Deb

Great capture! I do believe his is smiling at you! :)

I'm certain this is Deb's shot, I can see her style!

You just couldn't help yourself could you ? Yes, yes, yes, it is Debs capture. She gets full credit. Thanks. Bill

Thank you Cindy. I'll make sure Deb sees your comment. She'll be delighted. Thank you. Bill

Bill and Deb, thank you for sharing this character filled nest-builder in "Nest Building and Baby Birds" discussion on Poetic Poultry Group ;)

No, Thank you Anita for allowing us to share our "Wood Stork - Nest Builder" with your art group and we can assure you it was indeed our pleasure to do so. Bill and Deb

Thank you for the L/F Wes. Bill and Deb

Well timed to capture this excellent landing pose, Deb! The detail is excellent and I like the shadow patterns...and with the twig in the bill, it's a cool story-telling shot as well!

Wes: We are very appreciative for your visit and gracious compliments. Bill and Deb

Thank you very much John.

It needs a wonderful artistry for capturing this scene, dear Deb and Bill, well done, my friends.

WE thank you Michael for your visit and your awesome compliment. Bill and Deb

Thank you very much Sarah for your visit and compliment. Bill and Deb