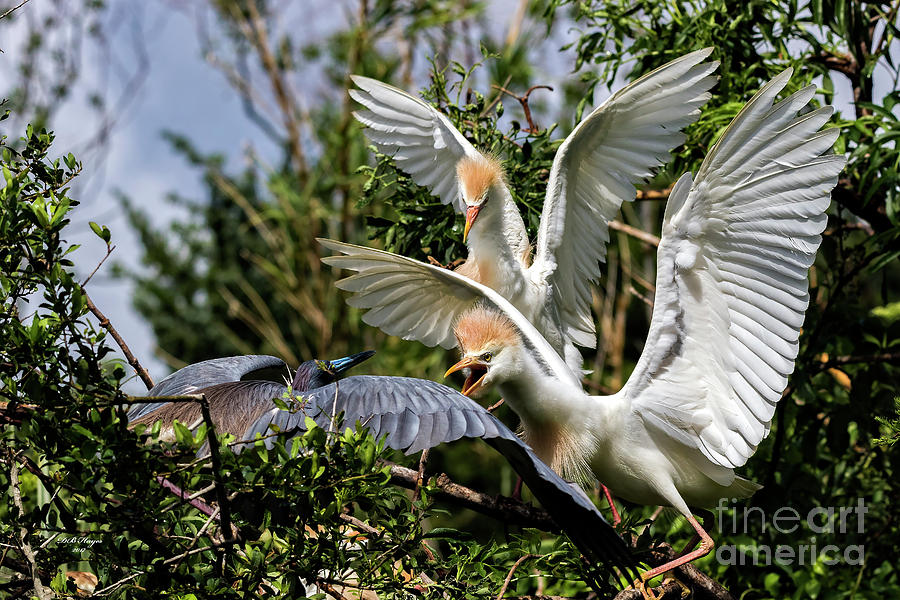 WE are honored to write the following art groups have featured our "Aggression Between Cattle Egrets and Tricolored Heron" image:

Deborah captured this incredible scene SHOWING a pair of cattle egret mates defending their area or nest against a tricolored heron. These three went at it for quite a while before the tricolored heron finally backed down. We were, once again, at the bird rookery on the Alligator Farm located in Saint Augustine, Florida when Deb captured this scene. Following are a few facts on each specie.

The cattle egret (Bubulcus ibis) is a cosmopolitan species of heron (family Ardeidae) found in the tropics, subtropics and warm temperate zones. It is the only member of the monotypic genus Bubulcus, although some authorities regard two of its subspecies as full species, the western cattle egret and the eastern cattle egret. Despite the similarities in plumage to the egrets of the genus Egretta, it is more closely related to the herons of Ardea. Originally native to parts of Asia, Africa and Europe, it has undergone a rapid expansion in its distribution and successfully colonised much of the rest of the world in the last century.

It is a white bird adorned with buff plumes in the breeding season. It nests in colonies, usually near bodies of water and often with other wading birds. The nest is a platform of sticks in trees or shrubs. Cattle egrets exploit drier and open habitats more than other heron species. Their feeding habitats include seasonally inundated grasslands, pastures, farmlands, wetlands and rice paddies. They often accompany cattle or other large mammals, catching insect and small vertebrate prey disturbed by these animals. Some populations of the cattle egret are migratory and others show post-breeding dispersal.

The tricolored heron (Egretta tricolor), formerly known in North America as the Louisiana heron, is a small heron. It is a resident breeder from the Gulf states of the United States and northern Mexico south through Central America and the Caribbean to central Brazil and Peru. There is some post-breeding dispersal to well north of the nesting range.

Tricolored heron's breeding habitat is sub-tropical swamps. It nests in colonies, often with other herons, usually on platforms of sticks in trees or shrubs. In each clutch, 3–7 eggs are typically laid.

All visits to our FAA-Pixels art sites are welcomed, encouraged and appreciated. Please visit often and, if you will, tell your friends and family about our art sites. They may find something they like and thank you.

~ I am speechless be seeing this masterpiece of yours! You done a great job with this piece! It’s obvious that you put a lot of thought into the details and it really showed! I love it! L/F

Thank you so very much Cia for your visit, gracious compliments and the L/F. WE truly appreciate ALL.

Thank you very much Miroslava.

Wow! Lots of action and excitement here! I love this!

Thank you so very much Heather for your awesome compliment, your visit, the "like & "fave" and the follow" WE very much appreciate all. Bill & Deb

Phenomenal photography Bill and Deb, this is INCREDIBLE ♥ L/F & following

Thank you Karry for your visit, compliment and the L/F. WE very much appreciate all. Bill & Deb Hayes

Thank you Alana Ranney. We sincerely appreciate your visit, compliment and the follow. Bill & Deb Hayes

Wow what a magnificent capture l/F

Thank you so very, very much Brian.

Heavenly. You photography is top notch

Stunning action shot Deb and Bill!. Perfect timing as they defend their nest. The wing spans showing beautiful clarity and action in this gorgeous wildlife photo

Thank you very much Julie.

Revisiting this wonderful photo capture of aggressive behavior between a pair of Cattle Egrets and a Tricolored heron, with great timing, colors, clarity, and perspective, Bill and Deb! F/L

Wonderful action capture of these Cattle Egrets and Tri-colored Heron Bill and Deb. Congrats on your feature in A Birding Group!

We are most appreciative for this honor Don. Thank you very much. Bill & Deb

Thank you very much Don for this feature and honor. Bill & Deb

This is an amazing action capture, Bill and Deb! Outstanding detail on all three birds and captured at a key moment in the conflict! Perfectly framed as well! L/F

Thank you Wes for visiting Deb's captured image and we sincerely appreciate your gracious compliment as well as the L/F. Bill & Deb

A truly amazing action capture, Bill and Deb! The fierceness and emotions of the birds are so evident which can only happen with great detail and light! Awesome! Your beautiful image has been featured by Wild Birds Of The World. L/F

William: WE are honored by this feature and we very much appreciate your awesome compliment as well as the L/F. Bill & Deb

Excellent clarity in this fabulous wildlife capture Bill and Deb!...F/L

Very nice find and presentation!! Thanks for the wonderful information!! v/f/t

Thank you Robert. WE sincerely appreciate your visit, compliment and the v/f/t. Bill & Deb

Thank you John for this honor, for which, we are most appreciative. Bill & Deb