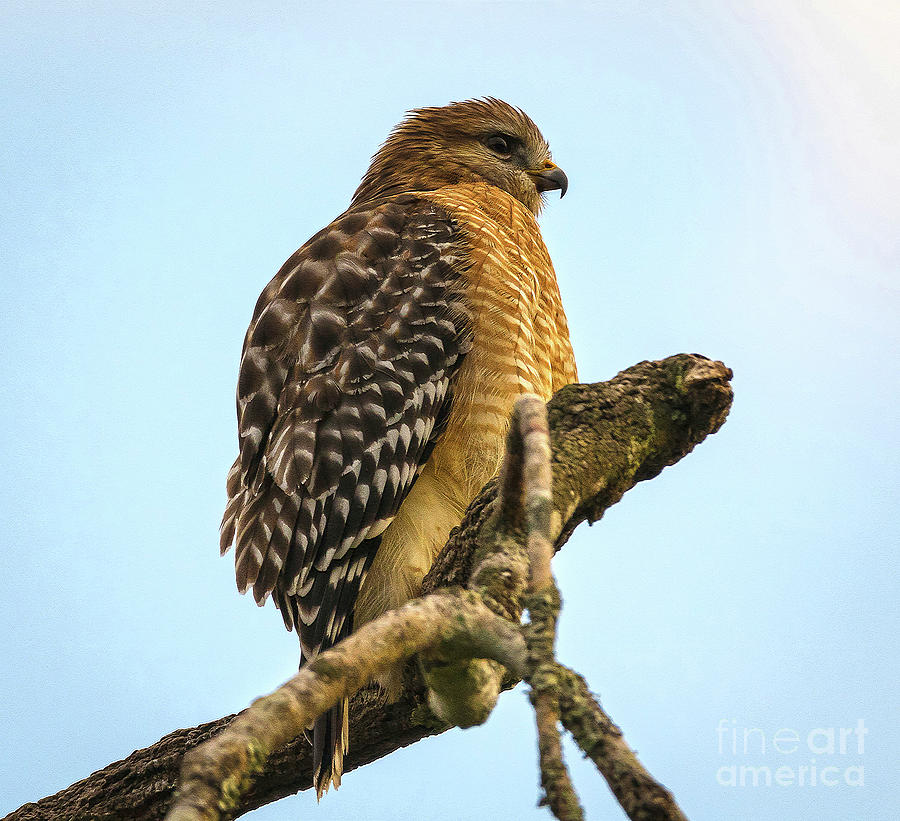 Fine Art America's (FAA) watermark will NOT appear on sold art as FAA removes the watermark before using "museum-quality" printing methods to print sold copies onto canvass, photo-paper, metal, acrylic or any of FAA's many other available medias.

WE are proud to write our "Red-Shouldered Hawk" has now been featured by the following well respected art groups:

While Deb and I were, once again, kayaking the Wacissa River, which is fed by clear underground spring water and is located about 25 miles east, southeast of Tallahassee, Florida, on Dec. 17, 2016 we came upon this gorgeous Red-Shouldered Hawk as it was perched high on a dead tree branch overhanging the river. It appeared to be, well, we are not sure exactly what it was doing but it looked stately doing it. Using our imagination one could think it was sitting there thinking to itself "this is my domain - I rule these waters - all should beware". Well, that is enough of trying to get inside a hawk's mind for now. Lets move on. All visits to our FAA-Pixels art site are welcomed, encouraged and appreciated. Please visit often and, if you will, tell your friends and family about our art site. They may find something they like and thank you. Thank you for visiting. Bill & Deb Hayes

Beautiful close up photograph of a Red-Shouldered Hawk on a perch, with great pose, colors, and composition, Bill and Deb! F/L

Thank you very, very much Morris.

Bill and Deb, thank you for sharing this stunning capture in "Eagles, Owls, and Hawks" discussion on Poetic Poultry Group ;)

WE very much appreciate your compliment and having the opportunity to share our "Red-Shouldered Hawk" image with your awesome art group. Bill and Deb

Hi Linda: Thank you for visiting our "Red-Shouldered Hawk" image, your wonderful compliments plus the L/F. WE are very grateful for all. Bill & Deb

Thank you Tom for visiting our Hawk and leaving your kind compliment. Bill & Deb

Hi Cindy: Thank for the visit and your very nice compliment. We appreciate both. B&D

Congratulations Bill & Deb, your work is Featured in "A Birding Group - Wings" I invite you to place it in the group's "2017 Featured Image Archive" Discussion!! L/Tweet

Hello Don: We are honored by and very much appreciate this feature of our "Red-Shouldered Hawk- Buteo Lineatus" image as well as your invitation to place it in the Archive, which we certainly will do. We are also very grateful for the "L/Tweet". Bill & Deb Hayes

Bill and Deb, thank you for sharing this lovely perspective in Eagles, Owls, and Hawks discussion on Poetic Poultry Group ;)

It was, without doubt, our pleasure to do so Anita. And we thank you for making the discussion available and for all you do for all of us trying to get our art/work before the world. Bill & Deb Hayes

Anita: This is a wonderful way to start this day reading you have featured our "Red-Shouldered Hawk" in your art group "Poetic Poultry". WE cannot thank you enough for the feature plus the gracious compliment. Bill & Deb Hayes

Beautiful detail on this Hawk capture - congrats on a well-deserved "WOW"!

Hi Myrna: Thank you for taking the time to visit. And your kind compliment. We appreciate it very much. We visited your site before leaving this message, picked one of the best bird images we have ever seen, left a message and returned to write this message. We hope you read it as you certainly deserve it. Thanks again. Bill & Deb Hayes

Thank you Debra for your gracious compliment. We very much appreciate it. We broke away before typing this message, went to your site, picked an image, left a message and returned. Thanks again. Bill & Deb

Wow!!! What a shot! Excellent!

David: Featuring our Red-Shouldered Hawk on the home page of your art group "Created by Southern Artists" is a great honor for us and we greatly appreciate it. Bill & Deb Hayes

Congratulations on the well deserved selection of this outstanding capture for William's Weekly Wows, Bill and Deb! If I could L/F it again, I would... :-)

Thank you Wes. It was a pleasant shock to learn this a little while ago. Deb still does not know. We very much appreciate your words and offer to L/F twice if you could. Bill & Deb

Bill and Deb, congratulations on your delightful image being chosen as one of William's Weekly Wows! l/f

Thank you Kay. We were really surprised to see this but we'll take it, of course. We cannot express our appreciate enough to you and everyone for their support. Thank you for the L/F. Bill & Deb Hayes

Hi Bill and Deb. This fantastic image is one of our two Wowie winners for the week ending 1/3/2017 in the group, Wild Birds Of The World. Nicely done!

William: We just left a message on the thread regarding this GREAT honor. We are "bowled over" with pride from this. Thank you very, very much. Bill & Deb Hayes

Bill and Deb, this is gorgeous. f

Hi Cindy: Thank you for viewing our hawk and a double thank you for the compliment plus the f. Bill & Deb Hayes

Thank you very much Carol for your compliment and the L/F. We truly appreciate both. Bill & Deb Hayes

This is a wonderful capture of a beautiful bird!

We are honored by and very grateful to the following 2 highly respected art groups who each featured our "Red-Shouldered Hawk - Buteo Lineatus" image on Dec. 30, 2016: "Images That Excite You" and "Animal Photographs". Thank you very much. Bill & Deb Hayes

Pamela: Thank you for taking the time to visit our art. We are grateful for and very much appreciate your compliments. Bill & Deb Hayes

Thank you Craig for your time and compliment. Bill & Deb Hayes

Thank you Teresa for your compliment. We appreciate it. Happy New Year !!

Another super shot, Bill and Deb! Outstanding focus work and textural detail on the plumage of this beautiful bird! L/F

Hi Wes: First thank you for viewing our image. We truly appreciate it. Second, we are very grateful for your complimentary words, in fact, more than you can know. Third, we sincerely appreciate you "liking" and "favoriting" our image. All mean a lot to us. Bill & Deb

Hi Bill and Deb! I don't think a bird shot can get much better than this. Exquisite detail and subject. Easiest decision as to featured it at Wild Birds Of The World. L/F

William: It is indeed an honor when one of our images is featured by you & your "Wild Birds Of The World" art group. And it is not simply because of the features you have granted us but because you take the time to actually study the images in detail, which we appreciate more than you can know. I wrote this statement based on the comments with each image you have made over time, which to me proves my point. Like you I have always been a person for "details". Never overlook the details !!! is something I have lived by my entire life. Now to your comments. WE are honored, grateful and very much appreciate everything you wrote and the time it took you to write it. Furthermore, we greatly appreciate the "L/F". THANK YOU !! Bill & Deb