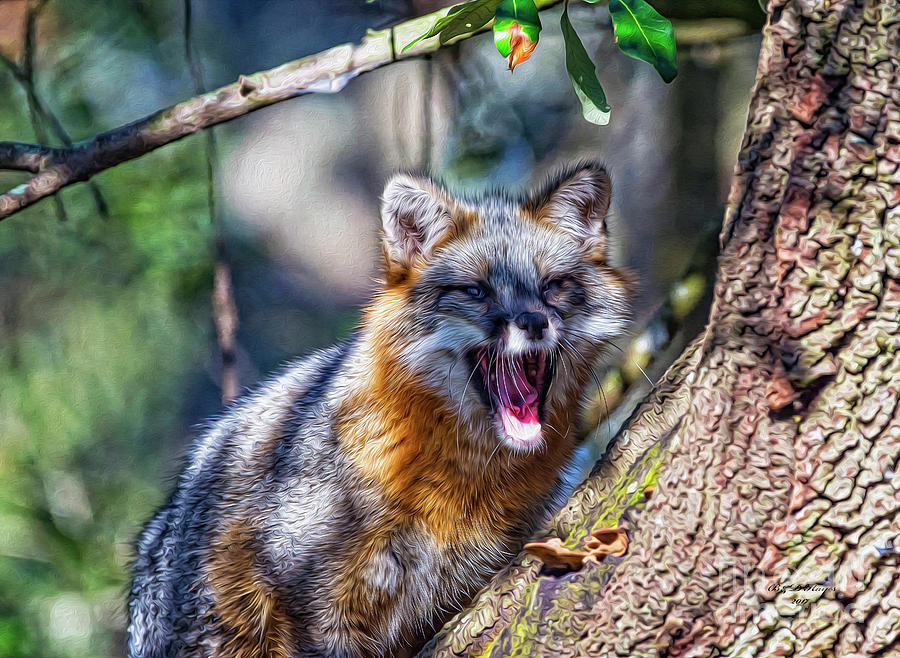 Gray Fox Awakens In The Tree

Gray Fox Awakens In The Tree

Fine Art Americas (FAA) watermark will NOT appear on sold art FAA as removes the watermark before each sold copy is "museum quality" printed onto canvass, photo-paper, metal, acrylic or any of FAA's many other available medias regardless of which one is chosen by the buyer.

COPYRIGHT NOTICE: THIS IS A COPYRIGHT & ALL RIGHTS RESERVED PROTECTED IMAGE.

WE are proud to write our "Gray Fox Awakens In The Tree" photo-painting has been featured by the following highly respected art groups;

Some time ago Deb & I were kayaking parts of the Okefenokee Swamp in southeast Georgia. WE had paddled from the Stephen Foster Park area, which is located in the southwest part of the swamp itself. From the park we paddled up the small canal into the larger water body then turned right toward the even larger northeast part. After paddling some distance we then diverted to the left up a small canal for a 1/5 mile or so. While slowly moving through the canal we happen to notice some movement upward in a tree about 15 yards or so from the bank of the canal. When we focused on the movement we saw what you see in this image. A gray fox appeared to be waking up from a nap & was yawning. Naturally we started photographing it as fast as we could and luckily we had our 600 mm lens attached to our cameras.

Of course, if you look closely you will probably notice this image is a little more than a standard photograph. I, Bill, along with Deb's verbal input here & there digitally painted a copy of the photograph to see if we could enhance the image to our liking using the digital art painting enhancements. Of course, since we posted it we're sure you realize we are happy with the results. Hopefully, you will be, too. Now for some gray fox facts.

The gray fox (Urocyon cinereoargenteus), or grey fox, is a carnivorous mammal of the family Canidae ranging throughout most of the southern half of North America from southern Canada to the northern part of South America (Venezuela and Colombia). No other canid's natural range spans both North and South America and it is the only American canid that can climb trees. This species and its only congener, the diminutive Channel Island fox (Urocyon littoralis), are the only living members of the genus Urocyon, which is considered to be the most basal of the living canids. Though it was once the most common fox in the eastern United States, and still is found there, human advancement and deforestation allowed the red fox to become more dominant. The Pacific States still have the gray fox as a dominant. Its specific epithet cinereoargenteus means "ashen silver.

All visits to our FAA-Pixels art sites are welcomed, encouraged and appreciated. Please visit often and if you will, tell your family and friends about our art sites. They may find something they like and thank you for the tip. WE very much appreciate you visiting. Bill & Deb Hayes

Hello Jim: Thank you for your visit as well as your very nice compliment plus the fv. WE very much appreciate ALL. Bill & Deb

Thank you Spencer for your compliment and visit. Bill & Deb

Thank you Cindy for both the compliment & the fav. Much appreciated. Bill & Deb

Stunning close up photo of a Gray Fox in a great pose, with interesting light and shadows, great colors, perspective, post processing and composition. Yes, your photo-painting of the photograph does enhance the image and add to the drama of this fabulous scene, Bill and Deb! F/L

Hi Morris: Thank YOU for visiting our Gray Fox photo-painting. WE are more grateful than you can imagine for your in-depth awesome complimentary comments. We also thank you for the L/F. Bill & Deb

Congratulations, Bill & Deb, Your delightful image has been featured on Fuzzy Warm and Soft!

Hello Phyllis: This is wonderful news. Thank YOU so very much for your awesome compliment and, needless to write, the feature. "Enjoy Life-Enjoy Art" = B&D Hayes

What a wonderful capture ... perfect timing!

Hello KG: Thank you for visiting and your compliment. WE truly appreciate both. B&D

Eva: Thank you so much for your visit, your compliment and the L/F. WE appreciate ALL. (Life is Art & Art is Life - Bill & Deb)

WE very much appreciate your compliment and your time to visit plus the L Sonali. B&D

Christy: Your name is new to us. We're always so happy when a new name pops up so we'll have to visit your art ASAP. Meanwhile, thank you for your visit to our Gray Fox digital photo-painting and please know we very much appreciate your very nice compliment. (Art is Life & Life is Art - Bill & Deb)

This is absolutely darling! l/f

Kay, we are so very grateful for your time to visit, your fantastic compliment and the L/F. (Art is Life & Life is Art - Bill & Deb)

You are awesome Lana for taking your time to visit, write such a wonderful compliment and the L/F. (Art is Life & Life is Art - Bill & Deb)

Hi Bob: Thank you for the compliment. B&D

Hello Marvin: Your compliment, visit and the L/F are all very much appreciated, indeed, yes they are. (Art is Life & Life is Art - Bill & Deb)

Judy: You have a way of writing that makes for some fantastic reading and we love and THANK YOU for every single word. WE also thank you for your time to visit. (Art is Life & Life is Art - Bill & Deb)

Outstanding capture. Love your handling of the photo painting techniques.

Hello Victoria: Thank you very much for your visit and your compliments. Both are sincerely appreciated. B&D

Hi Myrna: WE are very thankful for your visit and your awesome compliments. Thank YOU !! Bill & Deb

Ha, great timing to catch this beautiful fox in mid yawn, Bill and Deb! It's a wonderfully composed image too, with the fox perfectly framed between the diagonals of the tree branch and trunk. Likewise, your processing is excellent, with the painterly style presenting a very pleasing look. Great job too in bringing out the eyes despite them being in shadow...a great job, indeed of capturing and presenting this little character despite the difficult lighting conditions! L/F

Hello Wes: Deb and I just read your fantastically complimentary words and I said to Deb, "now do you understand why I enjoy reading Wes' comments?" She looked at me "bugged-eyed" moving her head up & down. WE are very, very grateful for your visit, your wonderful compliments and, of course, the L/F. Bill & Deb

Thank you Regina for visiting, your compliment and the "L". WE appreciate all. Bill & Deb

Hello Michael: WE very much appreciate this feature as well as your complimentary words. Thank you. Bill & Deb

Hi Jane: WE very much appreciate your visit as well as your very awesome words. Bill & Deb

Hello Anna: Thank you for visiting and your compliments. WE appreciate both. Bill & Deb