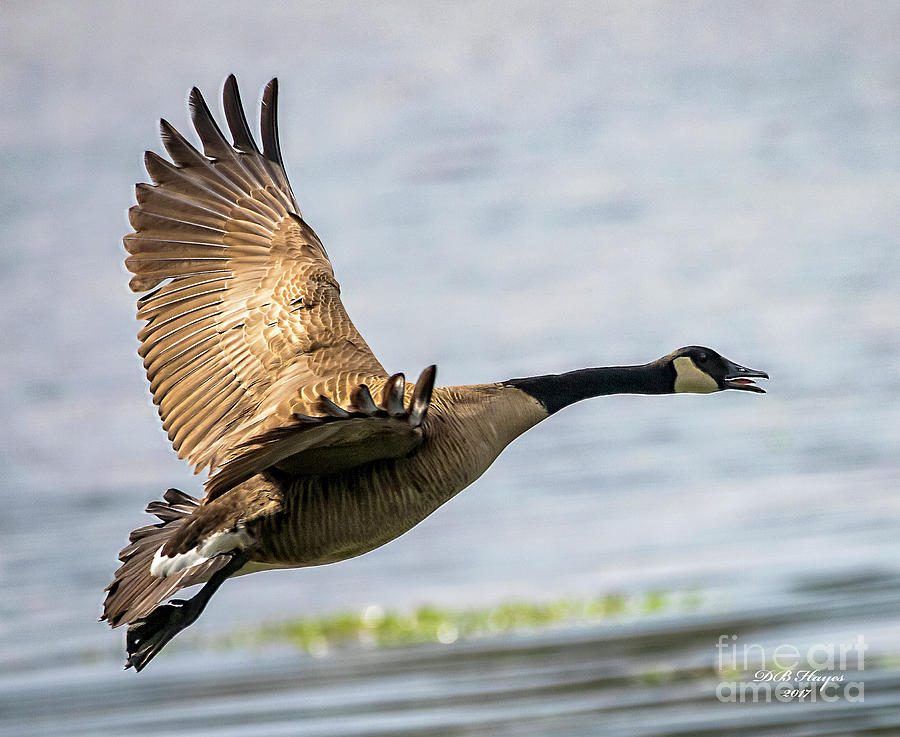 WE are proud to write the following highly respected art groups have featured our "Canada Goose In Flight" image;

WE decided to visit a place closer to home today (February 25, 2017) for our photography adventure, which was the Reed Bingham Georgia State Park located about 6 miles west of Adel, Georgia and is only about 30 miles "one-way" from our home. Reed Bingham is a little on the small size for a state park but is very well maintained, has a rather large lake considering the size of the park and is actually a very nice park. Many people camp there in their RVs or even in tents if they have the nerve to "rough" it. Personally, our days of roughing it ended many decades ago. At least we certainly hope so. We were on a small island in the lake, which is connected to the mainland by a "walk-over" bridge when several Canada Goose came flying onto the lake very close by where we stood. Deb and I couldn't believe our luck so we started shooting as fast as we could. This capture was accomplished by Deb so she gets the credit. We especially like it since it shows the Canada goose with its beak open and its tongue showing. It was "sounding off" like crazy we suppose letting all know to get the heck out of its way. Not sure why but it was noisy.
Now for a few words about this species.

The Canada goose (Branta canadensis) is a large wild goose species with a black head and neck, white patches on the face, and a brown body. Native to arctic and temperate regions of North America, its migration occasionally reaches northern Europe. It has been introduced to the United Kingdom, New Zealand, Argentina, Chile, and the Falkland Islands. Like most geese, the Canada goose is primarily herbivorous and normally migratory; it tends to be found on or close to fresh water.

Extremely successful at living in human-altered areas, Canada geese have proven able to establish breeding colonies in urban and cultivated areas, which provide food and few natural predators, and are well known as a common park species. Their success has led to them often being considered a pest species because of their depredation of crops and issues with their noise, droppings, aggressive territorial behavior, and habit of begging for food, especially in their introduced range. Canada geese are also among the most commonly hunted waterfowl in North America.

The black head and neck with a white "chinstrap" distinguish the Canada goose from all other goose species, with the exception of the cackling goose and barnacle goose (the latter, however, has a black breast and gray rather than brownish body plumage).

The seven subspecies of this bird vary widely in size and plumage details, but all are recognizable as Canada geese. Some of the smaller races can be hard to distinguish from the cackling goose, which slightly overlap in mass. However, most subspecies of the cackling goose (exclusive of Richardson's cackling goose, B. h. hutchinsii) are considerably smaller. The smallest cackling goose, B. h. minima, is scarcely larger than a mallard. In addition to the size difference, cackling geese also have a shorter neck and smaller bill, which can be useful when small Canada geese comingle with relatively large cackling geese. Of the "true geese" (i.e. the genera Anser or Branta), the Canada goose is on average the largest living species, although some other species that are geese in name, if not of close relation to these genera, are on average heavier such as the spur-winged goose and Cape Barren goose.

Thank you very much Cindy.

Thank you very, very much Kathy.

Thank you Kim for your visit, compliment and the L/F. WE very much appreciate all. Bill and Deb

Stunning Capture! The clarity and stop action in flight are just gorgeous! (l/f/s)

Diann: Thank you for visiting our art, writing your gracious compliment and the L/F/S. We very much appreciate all. Bill and Deb

Congratulations Deb, your work is Featured in "Coastal Waterbirds-Shorebirds" I invite you to place it in the group's "2017 Featured Image Archive" Discussion!! L/Tweet

Thank you Don for the privilege and honor. WE greatly appreciate this feature and all you do for all of us. Bill and Deb Hayes

Stunning work, Bill and Deb. Oh, to be able to spread our wings and fly... hmm no wings in my inventory. : ( A fave anyway )

That would be great Maria, wouldn't it? Thank you for your visit, your compliment and the Fav. We appreciate all. Bill and Deb

Thank you Sheila for visiting, your gracious compliment and the L/F. All are very much appreciated. Bill and Deb Hayes

Congratulations Bill and Deb, your work is Featured in "A Birding Group - Wings" I invite you to place it in the group's "2017 Featured Image Archive" Discussion!! L/Tweet

Don: You have honored us by featuring Deb's "Canada Goose" image on your art groups home page. WE sincerely appreciate the feature plus the L/Tweet. Bill and Deb Hayes

Michael: Thank you for honoring us with this feature, for which, we are very, very grateful. Bill and Deb Hayes

We are very appreciative for this feature David. Thank YOU !!! Bill and Deb Hayes

Thank you Sarah for your visit and compliment. Bill and Deb