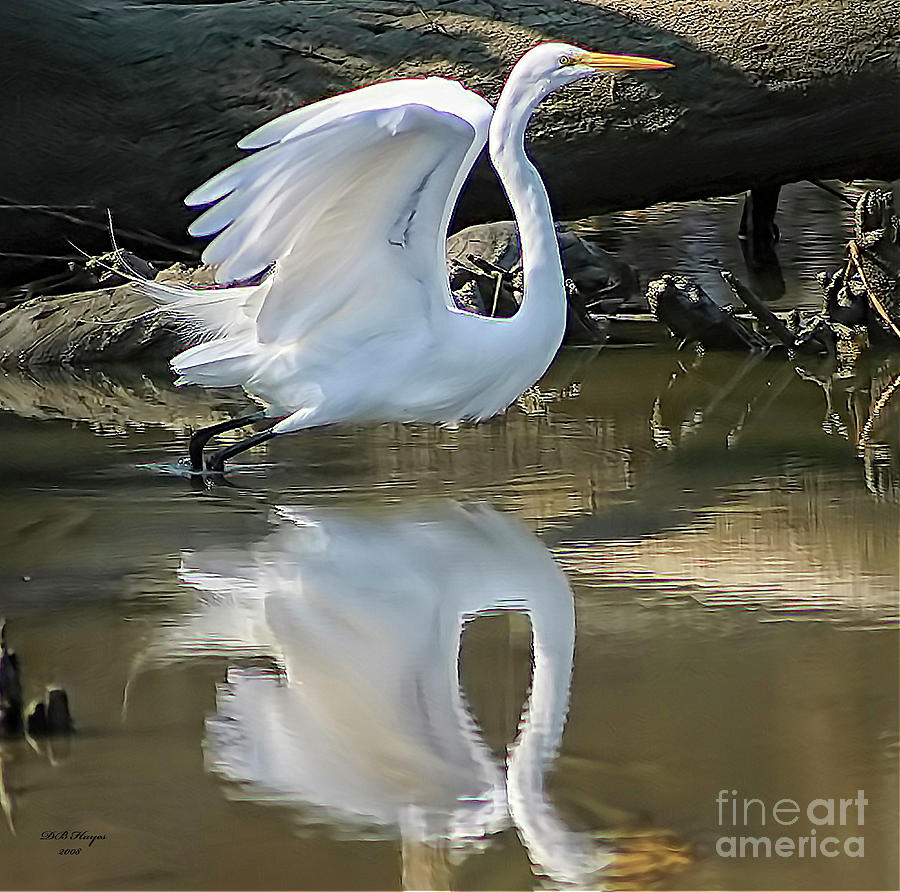 WE are very happy to write the following highly respected art groups have featured Debs "Great Egret Lifting Off" image;

Believe it or not it was back in 2008 when Deb came upon this gorgeous Great Egret about to take flight while she and her dad explored Jekyll Island, Georgia. Deb captured this image with her first Canon Rebel camera, which had only 10.01 megapixels in it. We had the original image posted and recently got a compliment. I thought "wow, I need to revisit that image and see if I can improve it since I now have FAR better photo editing software than when we originally posted the first image. After working with it for well over an hour I finally arrived at the posted image, which in my opinion is a tremendous improvement over the original. I was able to remove considerable noise from the original, sharpen it somewhat, remove some of the "shake" from the camera and generally make it into a much more detailed image. Of course, I also lightened it a bit. The colors are much sharper and just plain looks much better. Deb was extremely proud of this image when she captured it as it was her first large bird "action" capture I believe. Hopefully, when she sees this she will be even more thrilled. Yes, I am replacing the original without her approval. UPDATE; she just got home and saw this new version and is thrilled with it. Now for a few facts about this species.

The great egret is a large heron with all-white plumage. Standing up to 1 m (3.3 ft) tall, this species can measure 80 to 104 cm (31 to 41 in) in length and have a wingspan of 131 to 170 cm (52 to 67 in). Body mass can range from 700 to 1,500 g (1.5 to 3.3 lb), with an average of around 1,000 g (2.2 lb). It is thus only slightly smaller than the great blue or grey heron (A. cinerea). Apart from size, the great egret can be distinguished from other white egrets by its yellow bill and black legs and feet, though the bill may become darker and the lower legs lighter in the breeding season. In breeding plumage, delicate ornamental feathers are borne on the back. Males and females are identical in appearance; juveniles look like non-breeding adults. Differentiated from the intermediate egret (Mesophoyx intermedius) by the gape, which extends well beyond the back of the eye in case of the great egret, but ends just behind the eye in case of the intermediate egret.

It has a slow flight, with its neck retracted. This is characteristic of herons and bitterns, and distinguishes them from storks, cranes, ibises, and spoonbills, which extend their necks in flight. The great egret walks with its neck extended and wings held close. The great egret is not normally a vocal bird; it gives a low hoarse croak when disturbed, and at breeding colonies, it often gives a loud croaking cuk cuk cuk and higher-pitched squawks

ALL visits to our FAA-Pixels art sites are welcomed, encouraged and appreciated. Please visit often and, if you will, tell your friends and family about our art sites. They may find something they like and thank you for the tip.

"Art Breathes Life Into Our Souls"

Bill and Deb, This is absolutely gorgeous...stunning light and reflections. Nicely done. v/f

Wonderful work..... Your Gallery is wonderful....

Thank you so very much Iris for your wonderful words and visit. Bill and Deb

Spectacular! Lovely shot! Your beautiful image has been featured by Wild Birds Of The World. L/F

Hi William: WE are very appreciative for your compliment and are honored by this feature plus we THANK YOU for the L/F as well as for all you do for all of us. Bill and Deb Hayes

Congratulations Bill and Deb, your work is Featured in "A Birding Group - Wings" I invite you to place it in the group's "2017 Featured Image Archive" Discussion!! L/Tweet

Don: Having Debs "Great Egret Lifting Off" image featured by you for your "A Birding Group - Wings" art group is an honor for us and we are most grateful. WE also very much appreciate your invitation, which we accept, and we THANK YOU for the L/Tweet plus all you do for all of us. Bill and Deb

Anita: This feature is greatly appreciated and we are honored. WE also very much appreciate your compliment. Bill and Deb

Thank you Maria for visiting, your compliment and the L. Bill and Deb

Thank you very much for your visit Morris plus your gracious detailed compliments as well as the F/L. WE are very grateful for all. Bill and Deb

Michael: WE are very honored by this feature and please know we are most grateful. Bill & Deb

Thank you Cynthia for this awesome compliment and the L/F. Deb and Bill

Thank you David for this feature. WE are honored and very grateful. Deb and Bill

Thank you very much Janette for visiting and leaving your very gracious compliment and the F/L. WE appreciate ALL. Deb and Bill

Thank you Cindy. We appreciate your visit and compliment. Deb and Bill

That is absolutely fabulous. Your photography work is all amazing. Keep up your great work.

Diane: This compliment is awesome, more than we hope for...thank you so very much. Bill and Deb