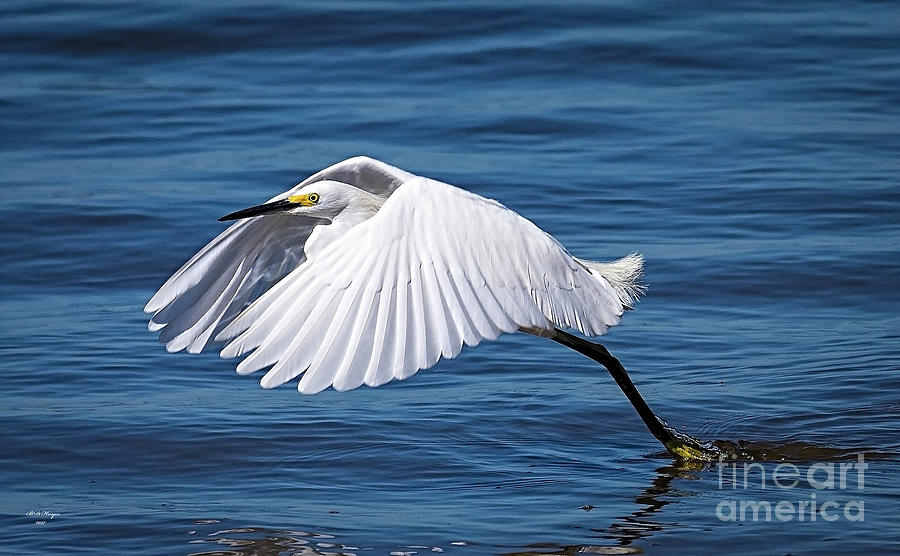 Fine Art Americas (FAA) watermark does NOT appear on sold art as FAA removes the watermark before each sold copy is "museum quality" printed onto photo-paper, canvass, metal, acrylic or any of FAA's many other available medias regardless of which one is chosen by the buyer.

COPYRIGHT DISCLOSURE NOTICE: THIS IS A COPYRIGHTED, ALL RIGHTS RESERVED PROTECTED IMAGES.

WE are proud to write the following highly respected art groups have featured our "Snowy Liftoff" image;

Deb and I decided to travel to Jekyll Island, Georgia on Saturday morning February 11, 2017 to view and photograph birds of all sizes we felt would be photo worthy. And we are happy to write we were greeted with beautiful weather and plenty of birds, therefore, we had a very successful day. Of course, one gorgeous bird we captured was this Snowy Egret as it was taking flight and are now posting it. Following is some history on the Snowy Egret you may find interesting.

The snowy egret (Egretta Thula) is a small white heron. The genus name comes from the Provenal French for the little egret Aigrette, a diminutive of Aigron," heron". The species name Thula is the Araucano for the Black-necked Swan, applied to this species in error by Chilean naturalist Juan Ignacio Molina in 1782.

The snowy egret is the American counterpart to the very similar Old World little egret, which has established a foothold in the Bahamas. At one time, the beautiful plumes of the snowy egret were in great demand by market hunters as decorations for women's hats. This reduced the population of the species to dangerously low levels. Now protected in the United States by law, under the Migratory Bird Treaty Act, this bird's population has rebounded.

This is an amazing action capture with beautiful detail. Well done. L/F

Thank YOU Evelyn for your visit, your awesome compliment and the L/F. ALL are very much appreciated. Bill and Deb Hayes

Technically excellent, aesthetically pleasing, and an example of what's possible through learning, persistence and talent! Note to self (another egret photographer): must try even harder!! Well done, I like this image very much.

Thank you Jason for your visit and your very much appreciated compliments. Bill and Deb Hayes

Thank you Brian for visiting, your gracious compliment and the L/F. ALL very much appreciated. Bill and Deb

Thank you Boris. Bill and Deb

Revisiting this amazing capture! The colors and details are excellent!

Hello Judy: Always a pleasure to see your name. Thank you for taking the time and leaving such a lifting compliment. We appreciate it. Bill & Deb

Allen: We thank you for this visit & your compliment. Bill & Deb

Thank you very, very much for this visit and compliment. We are delighted. Bill & Deb

Beautiful image, the eye and wings are great!

Thank you Robert. I always go for the eyes if possible. WE truly appreciate your time and compliment. Bill & Deb

What a lovely capture, such great timing! l/f

Thank you Peter for visiting and leaving your gracious compliments and the L/F. WE very much appreciate all. Bill & Deb

Wow! beautiful Bill and Deb....such skill in capturing the detail and the movement....l/f

Hi Denise: We are honored by your visit, compliments and the L/F. Thank you very much. Bill and Deb

Absolutely stunning, Bill and Deb! What an awesome capture of this majestic snowy egret taking flight... Perfect timing and awesome clarity! They are one of my fave birds. Exquisite poetry in motion in your superb photograph! F/L

Brian: Thank you so much for your visit and awesome compliments. We sincerely appreciate them plus the F/L. Bill & Deb

Hi Mellisa: WE thank you for visiting and your wonderful compliment. Bill and Deb Hayes

Don: You have honored us with this feature. WE gladly accept your invitation and THANK YOU for the privilege to do so plus we also thank YOU for the L/Tweet. Bill & Deb

Beautify capture of these gorgeous birds!

Thank you Heidi. WE very much appreciate your visit as well as your very kind compliment. Bill & Deb

Thank you Daniel for your visit, the great compliment and the L/F/T. WE very much appreciate ALL. Bill & Deb

what a great capture!

Thank you Joan. Just happen to be in the right place at the right time as the saying goes. However, that was one ACTIVE snowy egret. Thanks again. Bill & Deb

Gorgeous capture and timing! Stunning! Your beautiful image has been featured by Wild Birds Of The World. L/F

Thank you William for this feature and your fantastic compliments as well as the L/F. WE sincerely appreciate ALL. Bill & Deb Hayes

Thank you so very much David for this feature. You have honored us and we greatly appreciate it, Bill & Deb Hayes

Hello Paul: Your visit as well as your very nice compliment are both very much appreciated. Please visit often. Bill & Deb

Your timing was perfect as the flight-launch pose here is so very elegant, Bill and Deb! The lighting is wonderful, beautifully illuminating every detail in that sharply focused plumage, and the eye is tack sharp! Great work! L/F

Wes: Your compliments make us feel as though we know what we are doing, which we appreciate more than you can imagine. We also appreciate the L/F. Bill & Deb