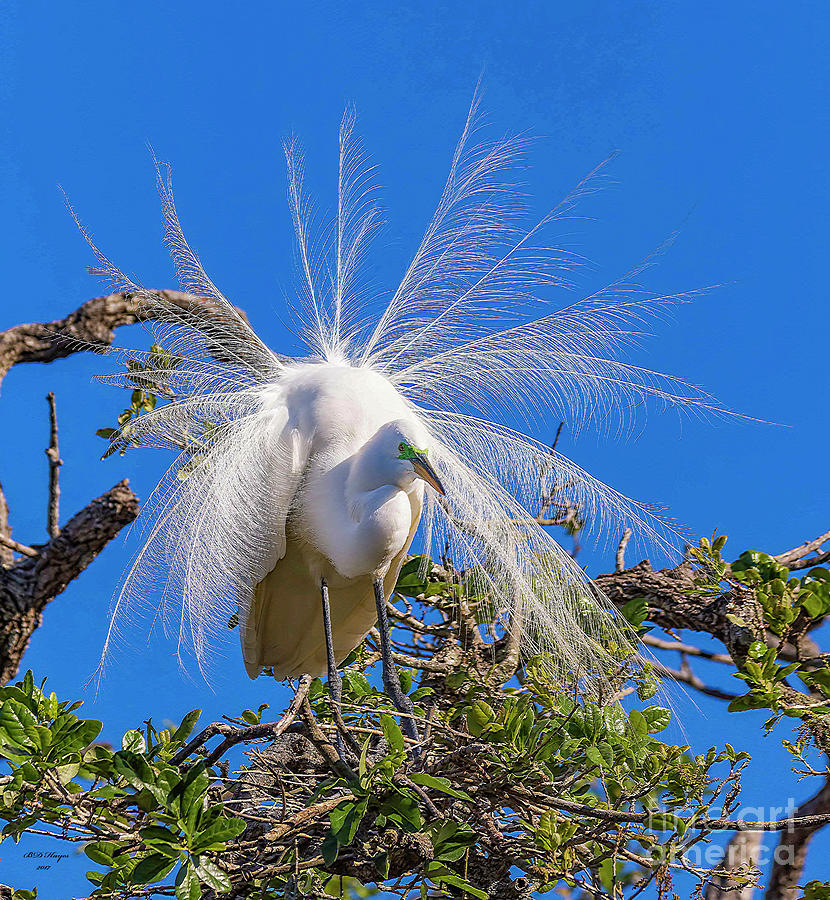 Fine Art Americas (FAA) watermark does NOT appear on sold art as FAA removed the watermark before each sold copy is "museum quality" printed onto canvass, photo-paper, metal, acrylic or any of FAA's many other available medias regardless of which on is chosen by the buyer.

We are very proud to write the following respected art groups have each featured on he date indicated by each our "Great Egret In Full Plumage" image;

Deb and I traveled to the infamous Alligator Farm located along the beautiful coast of St. Augustine, Florida on Wednesday, March 15, 2017, spent the night in the area and returned the next morning. While there we photographed a multitude of amazing birds; Great Egrets, Roseate Spoonbills, Wood-Storks, Night Herons and many others. The birds were either already nesting or building their nests or had built their nests and were trying to attract a mate. We have never seen this many birds in one place since we started down this photography path together. We were happily stunned at first. However, once we regained our senses we got down to business and started photographing as many as we could.

This pictured image is of a Great Egret in full plumage. It was in the process of trying to attract a mate to its nest I believe. Now for some scientific information about this gorgeous species.

The great egret (scientific name is ardea alba) is a little over three feet tall with a wingspan of almost five feet. Its feathers are entirely white. It has a long, sharp yellow bill and long gray to black legs, with non-webbed feet with very long toes.

When the great egret is in breeding plumage, it has long lacy and delicate plumes on its back that curl over its tail. Males and females look alike, but the males are a little larger.

The male great egret chooses the nesting site and builds a nest platform of sticks and twigs in a tree or bush before he selects a mate. Occasionally, the great egret will build its nest on dry ground near a marsh. The female great egret lays three to five pale green-blue eggs. The eggs take about three to four weeks to incubate. Both parents incubate the eggs and feed the chicks. The chicks fledge in about six weeks. If the nest is on the ground, the chicks will walk around the nest before they fledge. Both the male and female aggressively defend the nesting territory. Great egrets nest in colonies, often with herons and ibis.

Bill and Deb, what a truly spectacular portrait of this beautiful great egret in stunning full plumage... totally awesome perspective and composition! Majestic and magnificent! F/L

Excellent capture Bill and Deb, it's a wonderful place for photography, I visited there from the UK 2 years ago and would love to return, L/F

Hello Brian: That was our first visit but we hope to return on March 31st, weather permitting. And you are right it is a bird photographers dream place to visit. Thank you for your visit, compliment and the L/F. Bill and Deb

Beautiful capture of the Great Egret!

Thank you so much Myrna. Bill & Deb

Thank you Morris. WE appreciate your gracious compliments, visit and the F/L. Bill and Deb

What a fabulous capture! Were you up a tree taking that shot? :) Congratulations on your feature in the Wild Birds of the World Group! l/f

Hi Kay: Sorry to be so late replying. Have been working on our outside yard/garden/landscaping to bring it into Spring ready. WE were on a board-walk, which is elevated to give everyone who visits & walks through the bird rookery in the Alligator Farm in St. Augustine, FL. a higher and closer view of the amazing birds nesting in the surrounding trees. It is an amazing place. Thanks for your visit, wonderful compliments and the L/F. Bill & Deb

What an exquisite capture! The white of the feathers against the beautiful blue sky .... perfect! Well done, Bill and Deb! l/f/t

Thank you KG for your awesome compliments, visit and the L/F/T. We very much appreciate all. Bill and Deb

Thank you John for this honor. WE are grateful. Bill and Deb

Thank you Cindy for your compliment, visit and the F. Bill and Deb

Thank you very, very much Anita for this honor. WE are most appreciative for your compliment and the feature. Bill and Deb

Thank you so very much Don. WE are honored. And thank you for the L/Tweet. Bill and Deb

Thank you very much Don for this honor, for which, we are most grateful. Bill and Deb

Exquisite details, Bill and Deb! I love the green lore as well as the contrast from the white to the green to the deep blue. Wonderful. Your beautiful image has been featured by Wild Birds Of The World. L/F

Thank you very, very much William for your gracious compliments, the feature and the L/F. WE are honored by all. Bill & Deb

David: You have honored us with this feature and we are very grateful. Thank YOU. Bill & Deb

WE are most appreciative for this feature and honor Michael. Thank YOU. Bill & Deb

Your egret is posing as beautiful as a peacock, dear Deb and Bill.

Thank you Michael for your wonderful compliment and visit. Bill & Deb