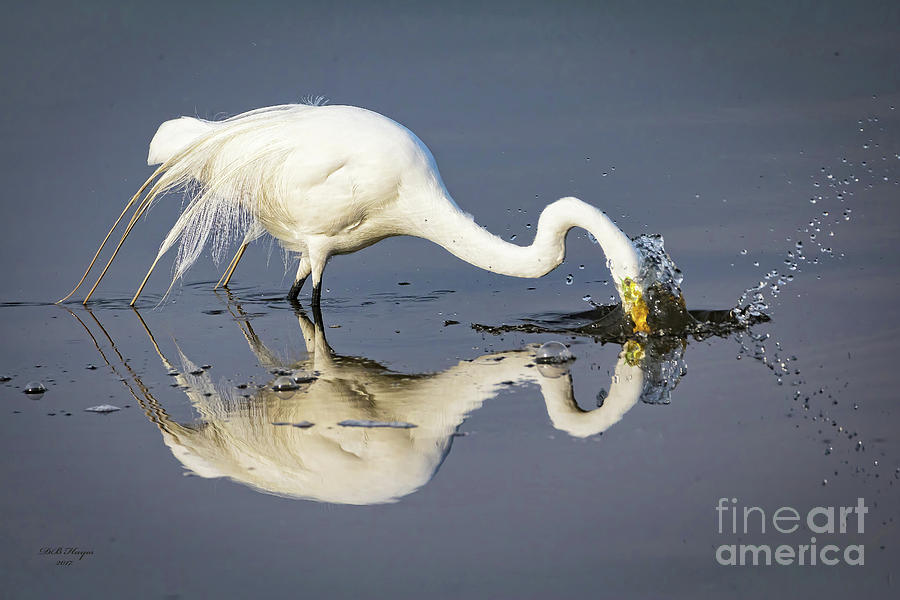 WE are very proud to write our "Great Egret Diving For Lunch" has been featured by the following highly respected art groups;

Deb and I were on Jekyll Island, Georgia on February 18, 2017 photographing all things of interest when we happened upon this great egret diving its head in & out of the water for food around mid-morning next to a boat loading - unloading ramp area. This image was captured by Deb. We posted an image I, Bill, captured almost identical to this one a few days ago. It is titled "Great Egret Dipping For Food". The different between the two images is this image shows more of the egret's head out-of-water as compared to my image. Both show water splashing and both show the egret's reflection. Since some customers may like this image showing more of the head we thought we would also post it. Now for a few facts on this species.

Like all egrets, it is a member of the heron family, Ardeidae. Traditionally classified with the storks in the Ciconiiformes, the Ardeidae are closer relatives of pelicans and belong in the Pelecaniformes instead. The great egret unlike the typical egrets does not belong to the genus Egretta but together with the great herons is today placed in Ardea. In the past, however, it was sometimes placed in Egretta or separated in a monotypic genus Casmerodius.

The Old World population is often referred to as the great white egret. This species is sometimes confused with the great white heron of the Caribbean, which is a white morph of the closely related great blue heron.

All visits to our FAA-Pixels art sites are welcomed, encouraged and appreciated. Please visit often and, if you will, please tell your friends and family about our art sites. They may find something they like and thank you for the tip.

Thank you very much Morris for your visit and compliment. Bill & Deb

Whahh , absolutly wonderful ! What a capture !!!

Thank you Aline. We very much appreciate your visit and awesome compliment.

That is great. Nice work, as always.

Thank you very much Diane.

Hi Bill and Deb! I was hoping I'd get this one! Fabulous image and catch! Your beautiful image has been featured by Wild Birds Of The World. L/F

Thank YOU William for your compliment and the feature and for all you do.

Great shot in the perfect moment!

Fabulous capture of amazing action of the water and you capture of the reflection and drops, super work!! F/L

Thank you Sandi for your visit and compliment.

Thank you Don for this honor.

Hi Anita: Thank you for the honor of this feature. We very much appreciate it and your very gracious compliment. Deb and Bill

What a wonderful image of reflection and nature! f/l/tweet

Thank you very, very much Janette for your visit, compliment and the F/L/Tweet. We sincerely appreciate all. Deb and Bill

Wow this is such remarkable photography of this bird in action!!! LF

Thank you Marvin for your wonderful compliment and the L/F. Deb and Bill

Thank you so very much for your visit, compliments, the Pin and the L/F. WE very much appreciate all Miroslava. Deb and Bill

Great shot, Bill and Deb! I bet he/she had a wonderful lunch :-)

Thank you Cindy - Hope you noticed this was not a duplicate. Bill and Deb