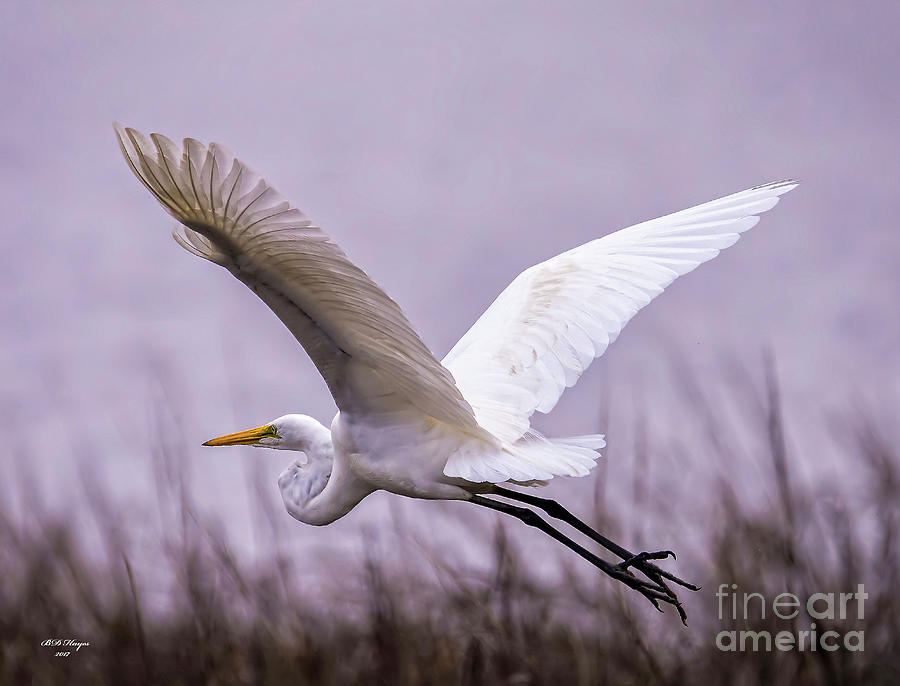 Flight Of The Great Egret

Flight Of The Great Egret

Fine Art Americas (FAA) watermark does NOT appear on sold art as FAA removes the watermark before each sold copy is "museum quality" printed onto photo-paper, canvass, metal, acrylic or any of FAA's many other available medias regardless of which one is chosen by the buyer.

We are very proud to write our "Flight Of The Great Egret" has been featured by the following highly respected art groups;

Deb and I were on the gorgeous Jekyll Island, Georgia on Saturday, February 18, 2017 photographing all things of interest. As we neared a marsh area there were several birds searching around in the shallow water looking for food. Among them was this beautiful Great Egret. WE both captured several images of this egret but I, Bill, was the lucky one to make this flight capture as it flew barely above the marsh line. Now for some information regarding this wonderful bird.

The great egret is a large heron with all-white plumage. Standing up to 1 m (3.3 ft) tall, this species can measure 80 to 104 cm (31 to 41 in) in length and have a wingspan of 131 to 170 cm (52 to 67 in). Body mass can range from 700 to 1,500 g (1.5 to 3.3 lb), with an average of around 1,000 g (2.2 lb). It is thus only slightly smaller than the great blue or grey heron (A. cinerea). Apart from size, the great egret can be distinguished from other white egrets by its yellow bill and black legs and feet, though the bill may become darker and the lower legs lighter in the breeding season. In breeding plumage, delicate ornamental feathers are borne on the back. Males and females are identical in appearance; juveniles look like non-breeding adults. Differentiated from the intermediate egret (Mesophoyx intermedius) by the gape, which extends well beyond the back of the eye in case of the great egret, but ends just behind the eye in case of the intermediate egret.

It has a slow flight, with its neck retracted. This is characteristic of herons and bitterns, and distinguishes them from storks, cranes, ibises, and spoonbills, which extend their necks in flight. The great egret walks with its neck extended and wings held close. The great egret is not normally a vocal bird; it gives a low hoarse croak when disturbed, and at breeding colonies, it often gives a loud croaking cuk cuk cuk and higher-pitched squawks.

this is sooo meditative, dear bill and deb... i really admire how you both work together yet keep your individuality, as that's great art too - not getting caught up in competition. (also thanks again for the cutest comment ever on my 'emu upfront'). all the best to you! l/fav

Thank you for your visit and gracious compliments plus our comment on your "emu" was certainly our pleasure.

You captured such a graceful moment Bill. You and Deb amaze me with your gorgeous art and this photograph is no exception! l/f

Thank you very, very much for these gracious words Jill.

Beauty and majesty unified in one incredible image of poetic flight of this gorgeous Great Egret... absolutely magnificent! Superb work of excellence, Bill and Deb! F/L

Thank you Brian so very much for your visit, awesome compliments and the F/L. Bill and Deb

A beautiful work of rare grace and power, Bill and Deb.

Thank you Iris. Bill and Deb

Thank you Carol. We appreciate your visit, compliments and the L/F. Bill and Deb

Wonderful flight photo of a Great Egret with great timing, perspective, light and shadows, and a great composition, Bill and Deb! F/L

Thank you for your compliment and visit. Bill and Deb

Don: WE are very grateful for and honored by this feature. Thank YOU !! Bill and Deb Hayes

Wonderful shot Bill & Deb! But no surprise as you are both so very accomplished. lf

Jane: We are very appreciative of your visit plus this very awesome compliment plus the L/F. WE very much appreciate ALL. Bill and Deb

Thank you Cindy. Bill and Deb