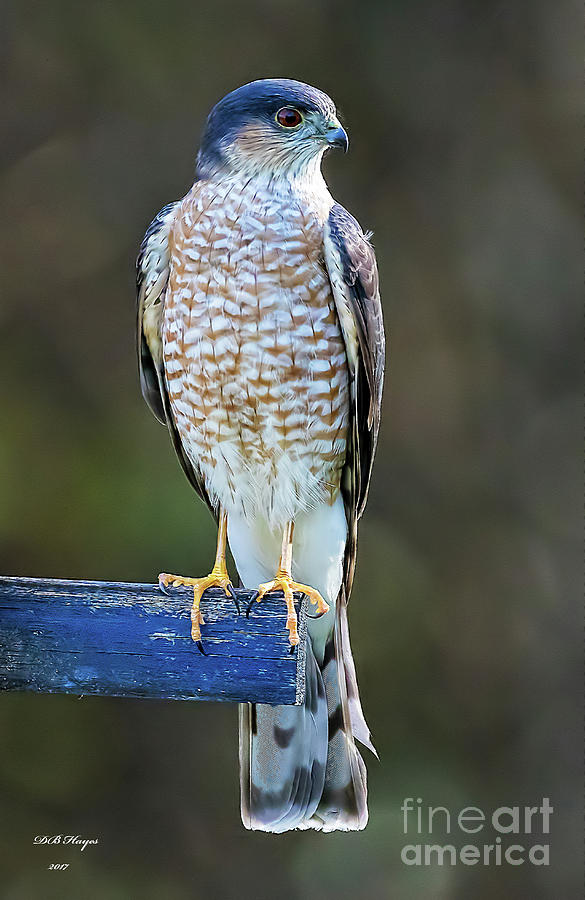 We are proud to write the following highly respected art groups have featured our "Sharo-Shinned Hawk" image;

Believe it or not Deb was sitting on or our back patio this Saturday (2-04-17) afternoon with her Canon camera plus her 150-600 mm Sigma lens attached when this gorgeous sharp-shinned hawk flew down and landed on one of our bird feeder suet arms. Now-a-days we don't usually post bird images if they were captured on our feeders but this is an exception as this is the very first sharp-shinned hawk we have ever seen land in our back yard since moving here in late 2005. We've seen other larger hawks but not this species. Of course, the smaller birds all flew off like crazy once this beauty came flying in and who could blame them. Following is some information we think you may find interesting about this species.

The sharp-shinned hawk (Accipiter striatus) is a small hawk described from Hispaniola, with males being the smallest hawks in the United States and Canada, but with the species averaging larger than some Neotropical species, such as tiny hawk. The taxonomy is far from resolved, with some authorities considering the southern taxa to represent three separate species: white-breasted hawk (A. chionogaster), plain-breasted hawk (A. ventralis), and rufous-thighed hawk (A. erythronemius).

Sharp-shinned hawk is often separated into four species, with the northern group (see distribution) retaining both the scientific name and the common name: Sharp-shinned hawk (A. striatus). In addition to the nominate taxon (A. s. striatus), it includes subspecies perobscurus, velox, suttoni, madrensis, fringilloides, and venator. The three remaining taxa, each considered a monotypic species if split, are the white-breasted hawk (A. chionogaster; Kaup, 1852), plain-breasted hawk (A. ventralis; Sclater, 1866) and rufous-thighed hawk (A. erythronemius; Kaup, 1850). The breeding ranges of the groups are entirely allopatric, although the wintering range of the nominate group partially overlaps with the range of chionogaster (as is also the case with certain taxa within the nominate group). This allopatry combined with differences in plumage (see appearance) and, apparently, certain measurements, has been the background for the split, but hard scientific data are presently lacking (AOU). Disregarding field guides, most material published in recent years (e.g. AOU, Ferguson-Lees et al. p. 586, and Dickinson et al.) has therefore considered all to be members of a single widespread species but not without equivocation: Ferguson-Lees et al. say that if they were to make a world list, they would include the three taxa as separate species (p. 75), and the AOU's comment includes the note "split almost certainly good".
Storer (1952) suggested that the southernmost populations within the nominate group were paler below, thus approaching Chionogaster. This has also been reflected in recent guides, where A. S. Madrensis of southern Mexico is described as being relatively pale below (compared to more northern subspecies), but if this is a sign of intergradation with Chionogaster or a north-south cline which includes both the members of the nominate group and chionogaster remains unclear. In Bolivia, ventralis and erythronemius approach each other, but no evidence of intergradation is known something that, without actual specimens, also would be hard to prove due to the variability in the plumage of ventralis.

All visits to our FAA-Pixels websites are welcomed, encouraged and appreciated. Please visit often and, if you will, tell your friends and family about our art sites. They may find something they like and thank you for the tip.

Hi Bill and Deb...I like your image. A nicely framed photograph...love the softness of the background. Well seen and photographed...Cheers Bob fv

What a beautiful bird, and photo!!! LF

Thank you Marvin. We appreciate your visit, compliment and the L/F. Bill & Deb

Thank you Kay for your compliment, visit and the L/F. Bill & Deb

Thank you very, very much Mellissa for your compliment and the L/F/Tw/P. We truly appreciate all. Bill & Deb

That is an excellent capture of a beautiful bird, well done. L/f

Thank you Brian. Your visit, compliment and the L/F are all very much appreciated. Bill and Deb

Thank you Geraldine. We appreciative you visiting our art, leaving your awesome compliments and the L/F. Bill and Deb

What a beautiful hawk.. Love it. L.F.

Thank you very much Geraldine for your visit, compliment and the L/F. Bill and Deb

Thank you Don for this honor, for which, we are most grateful. Bill and Deb

Handsome portrait of this awesome hawk!

Stunning! What a capture! Your beautiful image has been featured by Wild Birds Of The World. L/F

Thank you William for this honor. WE are very grateful. Bill and Deb

Thank you Cindy for your visit, compliment and the F. Bill and Deb

David, The feature of our "Sharp-shinned Hawk" is very much appreciate. Thank you. Bill and Deb

Thank you Michael. WE very much appreciate this feature and honor. Bill and Deb Hayes

Bill and Deb, what a beauty! Featured on Poetic Poultry Group, as well as "Eagles, Owls, and Hawks" discussion! http://fineartamerica.com/groups/poetic-poultry-.html

WOW !!! Thank YOU so much Anita, not only for the feature but also for the placement into the "Eagles, Owls, and Hawks" discussion. WE are honored and most grateful. Bill and Deb

Beautiful close up of a handsome raptor with fabulous colors, light, details and pose, Bill and Deb! Beautiful work! F/L

Thank you Morris for all. Much appreciated. Bill and Deb

Congratulations Deb, your work is Featured in "A Birding Group - Wings" I invite you to place it in the group's "2017 Featured Image Archive" Discussion!! L/Tweet

Thank you Don for this honor, for which we are very, very grateful. Bill and Deb

Thanks you Rick. Deb and Bill

Thank you Sarah for your gracious compliment and visit. Bill and Deb