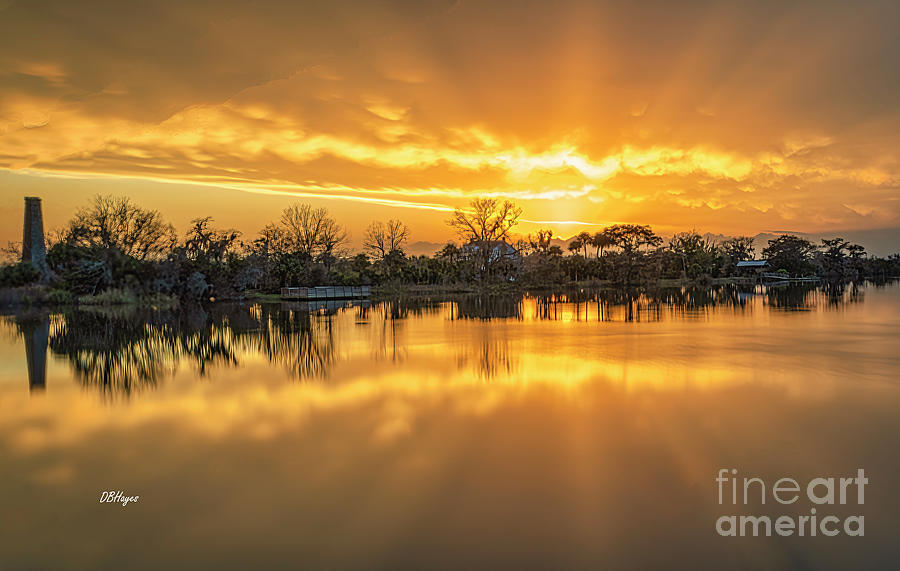 Extravaganza is a copyrighted, all rights reserved protected image. DBHayes Art (Deb & Bill Hayes) is/are the copyright owners. ONLY FAA & its sister company, Pixels, as of this date, has the right to print and offer for sale on our behalf this work of photographic art.

On December 30, 2021 we drove to what was once a thriving southern rice plantation located in McIntosh County, Georgia, which is near Darien, Georgia, a small Georgia city founded in 1736 to capture this sunset using a long exposure style of photography.

According to Wikipedia, Butler Island Plantation is a former rice plantation located on Butler Island on the Altamaha River delta just South of Darien, Georgia. It was originally owned by Major Pierce Butler (1744–1822), and was also owned by Tillinghast L'Hommedieu Huston and then R. J. Reynolds Jr. The plantation is managed by the Georgia Department of Natural Resources.

Major Pierce Butler, who was one of the founding fathers of the United States and a supporter of slavery, owned the property in 1790. He ran the plantation until his death in 1822, when his unmarried daughter Frances became trustee of the plantation, with the overseer, Roswell King as her co-administrator. Upon the death of trustee Frances in 1836, controlling ownership shifted to Major Butler's two chosen heirs, grandsons of Butler’s oldest daughter, who had made their permanent homes in Philadelphia.

Following the resignation of the King overseers in 1838, grandson and co-heir Pierce Mease Butler traveled to the plantation with his wife and two daughters in December of that year. His wife, Frances Anne "Fanny" Kemble, was opposed to slavery and wanted to see and learn how the slaves lived. However, Butler hoped the visit would change her views on slavery. She had been told that the slaves were well-treated and that they were never sold. She realized very quickly that this was not true. During her time there, she kept a diary and wrote about the horrific treatment and living conditions of the slaves. This time also marked the beginning of significant schism between the married couple. Eventually, she published her writing, Journal of a Residence on a Georgian Plantation in 1838–1839, which is thought by some to have influenced the British against supporting the Confederacy during the Civil War.

Once, but not this trip capturing Extravaganza, while we were walking around the plantation we came upon a small group of people consisting of a few whites and a few blacks. One of the blacks was an elderly lady. She was very friendly and started talking to us. She told us she was a direct descendant of slaves who worked and lived on the plantation all those years ago. She went on to explain she was doing her part to get the old plantation house restored for the benefit of all people. Deb & I were almost speechless to be in the present of this kind gentle soul and even though she was well up in the years she seemed truly determined and we admired her passion & goal.

All visits to our FAA-Pixels art-sites are welcomed, encouraged and appreciated. Please visit often.