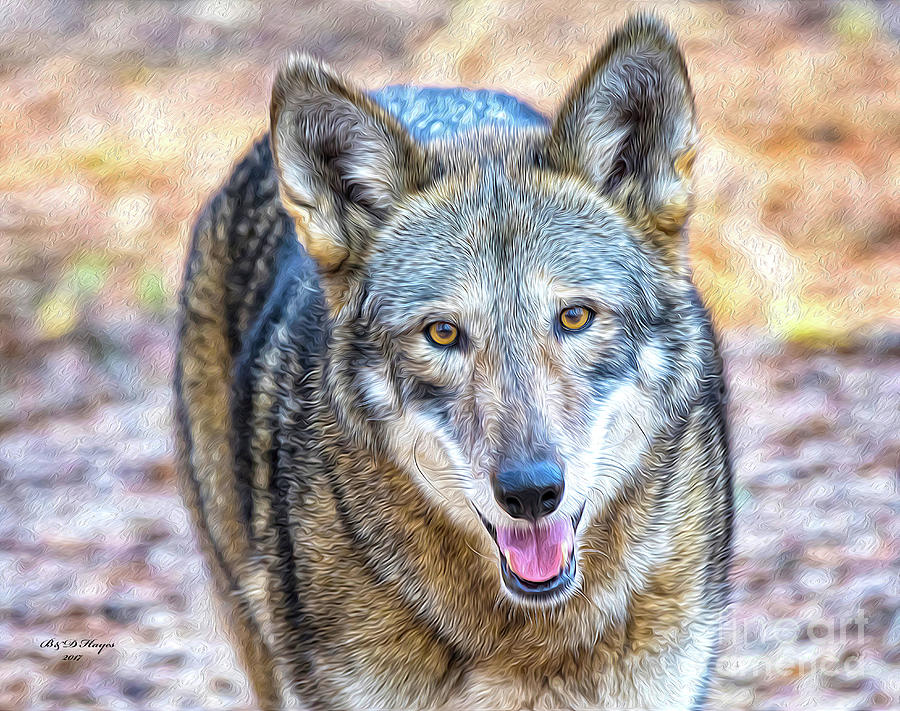 Fine Art America's (FAA) watermark will NOT appear on sold art as FAA removes the watermark before each sold copy is "museum quality" printed onto photo-paper, canvass, metal, acrylic or any of FAA's many other available medias regardless of which one chosen by the buyer.

IMAGE PROTECTION: THIS IS A COPYRIGHT & ALL RIGHTS RESERVED PHOTO-PAINTING. Any unauthorized attend to download, copy or alter this image in any way is ILLEGAL & STRICTLY PROHIBITED.

WE are proud to write the following highly respected art groups have featured our "Red Wolf Staring - TWO" photo-painting;

Deb and I recently came across this beautiful red wolf while in north Florida. It started at us as we photographed it as if trying to figure out what we were up to. However, it had a friendly enough look on its face and since we were using our 600 mm lens we were not very close so we did not feel threatened. This image began as a photograph. I worked with it using a digital oil brush until I was happy with the results, which, of course is posted for you make the final judgement.

The red wolf (Canis rufus Canis lupus rufus, also known as the Florida wolf or Mississippi Valley wolf, is a canid of unresolved taxonomic identity native to the eastern United States. It is generally, morphologically, an intermediate between the coyote and gray wolf, and is of a reddish, tawny color. The red wolf is a federally listed endangered species of the United States, and is protected by law. It has been listed by IUCN as a critically endangered species since 1996. Red wolves may have been the first New World wolf species encountered by European colonists, and were originally distributed throughout the eastern United States from the Atlantic Ocean to central Texas, and in the north from the Ohio River Valley, northern Pennsylvania and southern New York south to the Gulf of Mexico. The red wolf was nearly driven to extinction by the mid-1900s due to aggressive predator-control programs, habitat destruction, and extensive hybridization with coyotes. By the late 1960s, it occurred in small numbers in the Gulf Coast of western Louisiana and eastern Texas. Fourteen of these survivors were selected to be the founders of a captive-bred population, which was established in the Point Defiance Zoo and Aquarium between 1974 and 1980. After a successful experimental relocation to Bulls Island off the coast of South Carolina in 1978, the red wolf was declared extinct in the wild in 1980 to proceed with restoration efforts. In 1987, the captive animals were released into the Alligator River National Wildlife Refuge on the Albemarle Peninsula in North Carolina, with a second release taking place two years later in the Great Smoky Mountains National Park. Of 63 red wolves released from 1987 to 1994, the population rose to as many as 100 to 120 individuals in 2012, but has declined to 50 to 75 individuals in 2015 regrettably.

All visits to our FAA-Pixels art site are welcomed, encourage and appreciated. Please visit often and, if you will, tell your family and friend about our art sites. They may find something they like and thank you. Thank you for visiting. B&D Hayes

Beautiful capture of the Red Wolf! Love your images! f/l/tweet

WOW !! Thank you so much Janette. We truly appreciate your visit, compliments and the f/l/tweet. Bill and Deb

Congratulations, Bill & Deb! Your beautiful Image has been FEATURED on "Fuzzy, Warm & Soft!"

Thank you Phyllis for this honor, for which, we are very, very grateful. Bill & Deb

Thank you Cynthia for the compliment and the L/F. Both are very much appreciated. Bill & Deb

Gorgeous work Bill and Deb, the wolf appears to step outside the image beautifully! lf

Thank you so very much Anita for the visit, the wonderful compliment and the L/F. WE feel honored by your statement. WOW !! Thank YOU !! B&D

How can you not be hopeful and happy looking at that face! Fantastic work Bill and Deb! FL

We agree Kathi. Thank you so very much for visiting and for your gracious compliment and the F/L. We truly appreciate all. B&D

Congratulations! on this unique image’s being Featured in “The Artistic Aperture” group, and also Liked, Favorited, and Facebooked.

Hello Bob: This is fantastic news for us. WE are honored by this and appreciate it tremendously. Thank YOU !!. B&D Hayes.

Hello again Bob: WOW !!!! WE just read your message about our "Red Wolf Staring - TWO" being chosen as one of the 3 WOWs for this period. FAN-DARN-TASTIC !!! WE LOVE IT !! Thank you so, so very, very much. B&D

Thanks Louise for the visit, the compliment and the F/L. We appreciate all. B&D

David: WE are very grateful for and we are honored by this feature. Thank YOU !! B&D Hayes

Great expression, excellent textural detail and I really like what you did with the processing, Bill! L/F

Hello Wes: Thank you for visiting. We are very grateful for your awesome compliments and, of course, the L/F, too. Thank YOU !!! Bill & Deb

Congratulations, your art work is featured on the homepage of "PICTURES FOR PRESENT" group!

Thank you Michael for this honor. WE sincerely appreciate it. D&B Hayes