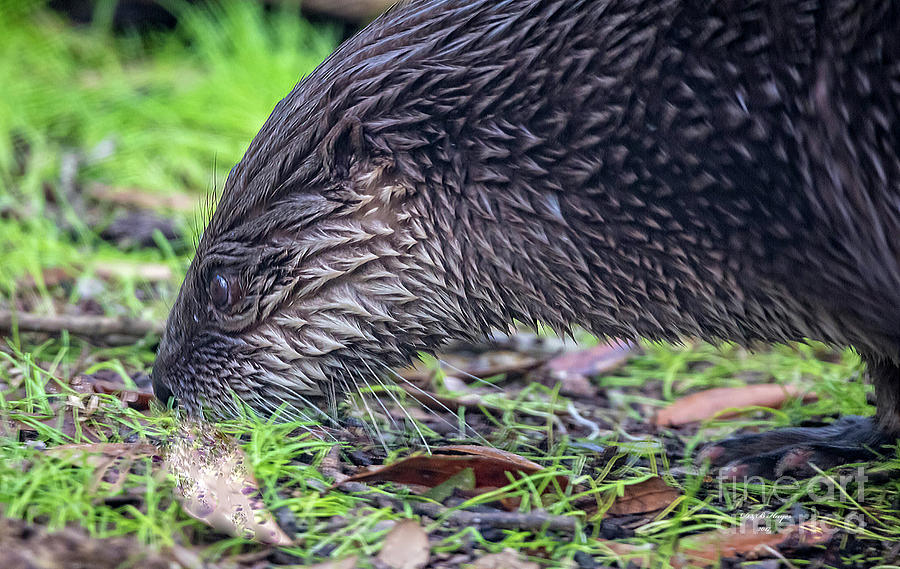 Fine Art Americas (FAA) watermark will NOT appear on sold art as FAA removes the watermark before each sold copy is "museum quality" printed onto canvass, photo-paper, metal, acrylic or any of FAA's many other available medias regardless of which one is chosen by the buyer.

COPYRIGHT NOTICE: THIS IS A COPYRIGHT, ALL RIGHTS RESERVED PROTECTED
IMAGE.

WE are proud to write our "River Otter Astray" image has been featured by the following art groups;

This picture generates from a story many of you will find hard to believe. If you follow us some of you know we have a rather large size Koi fish pond. In fact, it holds in the neighborhood of 4 to 5,000 gallons as close to what we and several people we know can figure. When I, Bill, dug it out years ago I dug it in an irregular shape as I wanted to make it more interesting rather than a round or rectangular shape. I also planted 2 river birch and one weeping willow trees on the surrounding banks so the overhanging branches would provide shape over the pond water once the trees had grown rather tall.

Of course, we slowly stocked the pond with Koi fish plus some gold fish. Over the years as they grew larger and larger plus multiplied the pond has been visited by many different predators. Examples being; hawks, owls, herons and/or kingfisher birds plus we're sure others we have not seen. However, the strangest visitor we have seen was a river otter. In fact, the posted image is it. There is a federal protected wildlife wetland refuge that is adjacent to our back yard. The wettest part is not near us but probably at least a mile or so away but the parts that is adjacent to our yard is heavy wooded. Very early one morning about 2 years ago when I looked out our sun-room toward the pond I noticed a large "wake" moving across the pond. Knowing we had no fish that large this concerned me as we have also seen alligators come out of the refuge although so far, at least, never have they entered our pond. I walked out to check what as causing such a wake and found it was a river otter. It had one of our large gold fish in its front feet/hands or whatever they are called. It made it way to the opposite side, laid on the bank and started to eat the tail off the goldfish. I shouted at the otter at which time it was so startled it threw the goldfish into the air, jumped up and ran off into the woods. Next morning it was back. Following morning Deb photographed it as it barely came out of the woods and was carefully looking around the ground. I then contacted the Georgia Wildlife Authorities, which lead to them setting a trap that night, catch it and relocated it. So far, at least as far as we know we have not had any further river otters to visit our Koi pond. And that is something you don't read everyday, is it ? Following is a little history about Georgia River Otters.

The river otter (Lutra canadensis) is a member of the Mustelidae or weasel family. It is an amphibious member of this family as are the mink and sea otter. While many states experienced declines in river otter densities, distribution, and in some cases extirpation in the mid 1800s - 1900s, Georgia's population remained fairly widespread throughout much of the state. Today, the river otter thrives throughout the state, including areas in north Georgia where its populations were once diminished. River otter abundance is directly dependent on habitat quality and availability.

ALL visits to our FAA-Pixels art sites are welcomed, encouraged, and appreciated. Please visit often and, if you will, tell your friends and family about our art sites. They may find something they like and thank you for the tip.

"Life is Lacking Something Without Art"

This is a fabulous, tack sharp image of one of my favorite animals! l/f

Thank you Kay for this gracious compliment and the L/F as well as your visit. Bill and Deb.

Thank you very much. B&D

Debbie: WE are grateful for your visit as well as your compliment. Bill & Deb

Ohhh, what an awesome capture!!! Love the precision in the details of the otter!!! Magnificent!!!

Thank you so very much Maxine. WE appreciate your visit and your wonderful compliments. Bill & Deb

Hi Cynthia: We are very thankful for your visit, your gracious compliment and the l/f. Bill & Deb

Asbed: WE are very grateful for your visit, your kind compliment and, of course, the "Like + Fav". All are appreciated. "Life Lacks Without Art" = Bill & Deb Hayes

Thank you Lynn. Much appreciated. B&D

Hi Patrice: We'll glad you visited and we very much appreciate your compliment plus the Fav. "Art Elevates Life = Bill & Deb Hayes"

Thank YOU Judy for your visit and compliments. WE appreciate both. Bill & Deb

Wonderful detail in your close up image. Make more images, maybe one with a fat Gold fish.

Hello Daniel: Thanks for the compliment. We'll see on the additional images. B&D

Thank you Marlin & Laura for your visit and compliment. B&D

Hello William: WE are very grateful for your time to visit our "River Otter Astray" image. WE are also very honored by and very much appreciate your gracious compliments plus the L/F. (Art Excites Life = Bill & Deb Hayes)