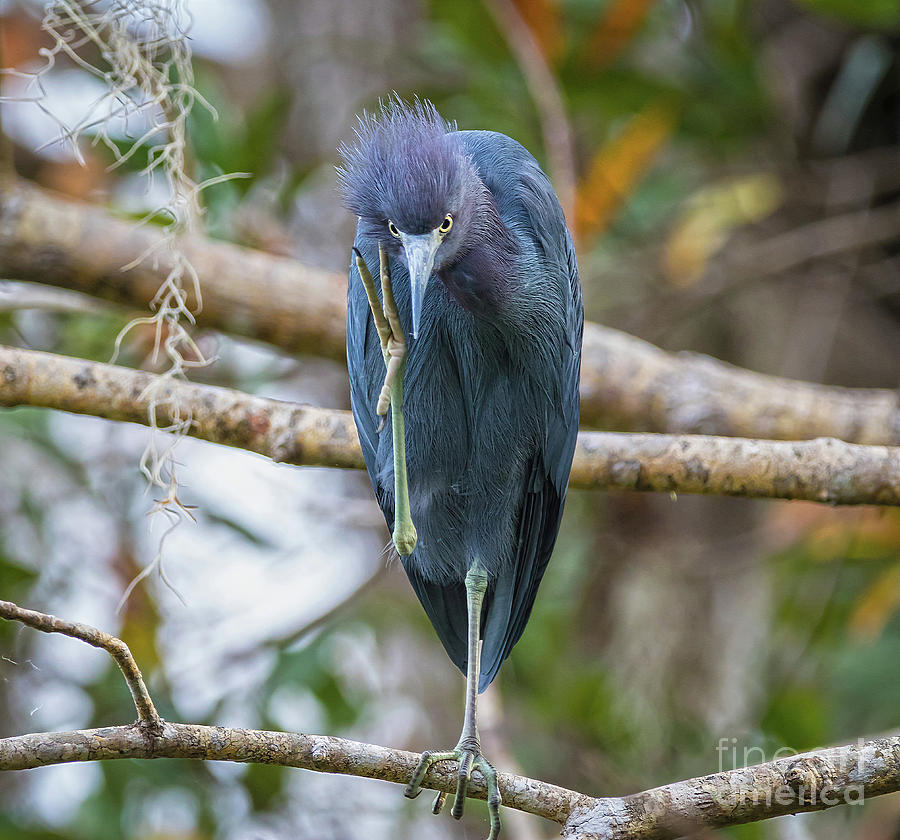 WE are very happy to write the following highly respected art groups have featured our "That Feels Great - Little Blue Heron" image;

WE were kayaking the Wacissa River, which is located about 25 miles or so east, southeast of Tallahassee, Florida on December 04, 2016 when we came upon this gorgeous Little Blue Heron perched overhead on a tree branch overhanging the river. Bill, as usual, paddled the kayak as close as he dared and we started photographing this gorgeous bird of nature. It didn't really seem to be bothered that we were not too far from it as it scratched away at the side of its head. These beautiful birds never cease to amaze us. Following is some additional information we managed to find about this species.

The little blue heron (Egretta caerulea) is a small heron. It breeds in the Gulf states of the US, through Central America and the Caribbean south to Peru and Uruguay. It is a resident breeder in most of its range, but some northern breeders migrate to the southeastern US or beyond in winter. There is post-breeding dispersal to well north of the nesting range, as far as the Canada US border.

This species is about 60 cm (24 in) long, with a 102 cm (40 in) wingspan, and weighs 325 g (11.5 oz). It is a medium-large, long-legged heron with a long pointed blue or greyish bill with a black tip. Breeding adult birds have blue-grey plumage except for the head and neck, which are purplish and have long blue filamentous plumes. The legs and feet are dark blue. The sexes are similar. Non-breeding adults have dark blue head and neck plumage and paler legs. Young birds are all white except for dark wing tips and have dull greenish legs. They gradually acquire blue plumage as they mature.

The little blue heron's breeding habitat is sub-tropical swamps. It nests in colonies, often with other herons, usually on platforms of sticks in trees or shrubs. Three to seven light blue eggs are laid. The little blue heron stalks its prey methodically in shallow water, often running as it does so. It eats fish, frogs, crustaceans, small rodents and insects.
White little blue herons often mingle with snowy egrets. The snowy egret tolerates their presence more than little blue herons in adult plumage. These young birds actually catch more fish when in the presence of the snowy egret and also gain a measure of protection from predators when they mix into flocks of white herons. It is plausible that because of these advantages, they remain white for their first year.

All visits to our FAA-Pixels art site are welcomed, encouraged and appreciated. Please visit often and, if you will, tell your friends about our art site. They may find something they like and thank you for the tip. Thank you for visiting.

"Art Adds That Something To Life"

Awesome color and detail! Love the expression on it's face! Excellent image!

Hi Judy: WE are so sorry for the delay replying. Don't know how this slipped by us. We are very grateful for your wonderful compliments and we agree with you about its face. WE had several images of this heron to chose from but this facial expression with its "wired" look in its eyes plus the one leg up near its head sold us on this one. We knew right away this was the one. Thanks again. Bill & Deb

Thank You too DI. Sorry for the delay replying. Bill & Deb

WOW !! Cannot believe I'm running so behind. Thank you Stephen for your wonderful compliments. Bill & Deb

Cool stories behind your photos!

Hi Michael: We enjoy not only posting as good images as possible but also making the reading about them worthwhile if the viewer takes the time. We very much appreciate you doing so. Bill & Deb

Thank you Cindy for spending time with our Little Blue Heron, your compliment and the F. All much appreciated. Bill & Deb

What a fun capture!

Alan: It was. Thanks for visiting our art. Bill & Deb

Awesome capture of this beautiful bird

Thank you Tonia for visiting and your compliment. Bill & Deb

Thank you Teresa. We appreciate your visit and kind word. Bill & Deb Hayes

Hi Lynn: Thank you for visiting and your complimentary words. We greatly appreciate both. Bill & Deb Hayes

Seems like this beautiful heron is signing a Hello to you and you captured the moment very well.

Robert, I agree with you and I have regretted not naming this image "Hi there says the Little Blue Heron". If I remember correctly Deb actually captured this image so she gets the credit. Thank you for both visiting our art and your kind words. Bill & Deb Hayes

Excellent capture, Bill and Deb! Superb clarity and I love the pose! L/F

Hi Wes: Thank you for stopping by to view our Little Blue Heron. That pose stopped us in our tracks when viewing the images and we knew we had to post this one. We are very grateful for your gracious compliments and the L/F. Thank you very, very much !! Bill & Deb Hayes

Hello and Happy New Year! Your beautifully detailed image has been featured by Wild Birds Of The World. L/F

Happy New Year to You, Too William: And we cannot think of a better way to start this new year than with a feature of our "Little Blue Heron" by you and your art group "Wild Birds Of The World". We are very grateful for this feature plus the L/F. THANK YOU !! Bill & Deb Hayes

This is one bird I have not seen. Great catch.. LF

Thank you Geraldine for the compliment and the L/F - Both very much appreciated . Bill & Deb

One day later on Dec., 11, 2016 we can add one more highly respected art group bring the total to 4 that has featured our image "That Feels Great - Little Blue Heron". This THANK YOU for featuring our image goes to the art group "FAA Portraits - Birds". We are honored by this feature. Bill & Deb Hayes

As of today, December 10, 2016, we are very happy to write our "wired-looking" "Little Blue Heron" has been FEATURED by 3 highly respected art groups. They are; the "Animal Photographs" group, the "USA Photographers ONLY" group, and "A Birding Group - Wings". We cannot thank each group administrator enough for honoring us with these features. Bill & Deb Hayes

Hi Judy: It's "hair-do" reminds us of "Don King" if you remember that fellow. Thank you both for the FEATURE and the wonderful compliment. Both are greatly appreciated. Bill & Deb

This is a beautiful image; great clarity, wonderful comp! l/f

Hi Toni: THANK YOU sincerely for your fantastic compliments.

Wow, what a fabulous capture! lfpt

Michele: Thank you kindly for your wonderful compliment !! We appreciate them more than you can imagine. Bill & Deb Hayes

Thank you Marv. We appreciate you stopping by and leaving your compliment.

What an awesome portrait! Love it!

Hi Anna: Thank you for such a wonderful compliment, which we love.

Hi Anne: Thank you. We appreciate you stopping by and leaving your compliment.

what a handsome dude!

Hi Alan & Marcia: It almost looks like it was waving at us. Thank you for the compliment.

Such a wonderful capture with great clarity, Bill and Deb. L/F/P

Hi Maggie: We very much appreciate your compliment.